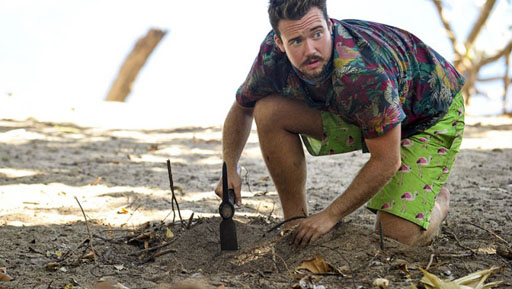 CBS is standing by its decision to broadcast the very personal revelation that occurred in this week’s Survivor “tribal council” when contestant Jeff Varner outed Zeke Smith as transgender.

Here’s the statement from CBS released to The Hollywood Reporter:

“After the tribal council scene in last night’s Survivor was filmed, we consulted with Zeke Smith and with GLAAD in advance of the broadcast, including the issue of how Zeke would tell his story after the episode aired,” the network said in a statement. “This is his second consecutive season on Survivor. From his first season through the current edition, we have always been guided by the principle that this is his story to tell, and it remains so. We support how [host] Jeff Probst and the producers handled a very sensitive situation and marvel at the grace Zeke exhibited under extraordinary circumstances. We have also respect for how Jeff Varner has expressed remorse for his mistake, both in the episode and in his subsequent dialogue with the media. In the end, we believe this episode, accompanied by Zeke’s own remarkable writing and speaking on the subject, has provided an unexpected but important dialogue about acceptance and treating transgender people with respect.”

I know there’s been discussion among LGBT activists about whether it was exploitive to include the “outing” in the Survivor episode.

My personal feeling is that, since this was done with Smith’s blessing, it’s a good thing.

Not only did the incident highlight how terrible outing transgender folks is, Smith handled the moment with so much dignity, that I think this was a positive for the trans community.

Plus, the reactions of outrage by his fellow contestants showed much broad support for the trans community.

If you haven’t read Zeke’s terrific personal essay about not only the experience of Survivor as a whole, but Varner’s outing of him, you really need to click here and read it.