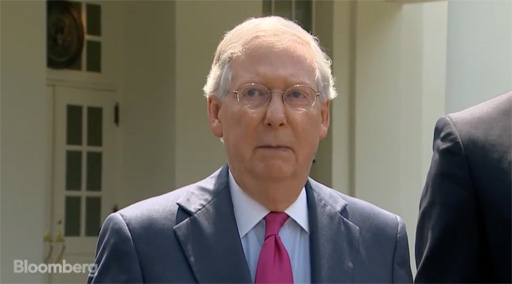 The nonpartisan Congressional Budget Office has scored the “Obamacare Repeal Reconciliation Act which Senate Majority Leader Mitch McConnell plans to bring up to a vote next week and the news is not good.

According to the CBO, the legislation would lead to 32 million fewer people with health coverage over the next 10 years.

This isn’t the Better Care Reconciliation Act, the measure to repeal and “replace” the Affordable Care Act that Senate Majority Leader Mitch McConnell (R-Ky.) shelved Monday because it lacked enough support to pass ― and that President Donald Trump and some Republican senators are trying to revive.

Instead, McConnell said he plans to bring up legislation bluntly entitled the Obamacare Repeal Reconciliation Act, which is based on a bill Congress passed in 2015 and that President Barack Obama vetoed last year.

Both the House-passed American Health Care Act and the Better Care Reconciliation Act sought to erect new health insurance systems and new, less generous forms of financial assistance as well as eliminate many of the Affordable Care Act’s regulations and consumer protections.

The Obamacare Repeal Reconciliation Act, by contrast, would merely eliminate the Affordable Care Act’s tax credits for private insurance, funding for its Medicaid expansion, the individual mandate that most Americans obtain health coverage or face tax penalties, the mandate that large employers offer health benefits to workers, and the taxes on wealthy people and health care corporations.

The result of those policies, the Congressional Budget Office projected in its report Wednesday, would be vastly more uninsured people and an unsustainable health insurance market.

Taking away financial assistance for private insurance and funding for states that expanded Medicaid under the Affordable Care Act would cause millions to lose coverage, including 17 million next year alone.

But the damage to the health care system would go deeper. Absent the individual mandate ― which encourages low-cost healthy people to enroll in coverage ― and the tax credits for insurance policies sold on the exchanges, insurers would be forced to increase premiums to cover the expense of treating those customers who are sick enough that they are motivated to buy coverage.

The CBO report also predicts premiums in the individual marketplace (which is how I buy my own health insurance) would double over the next 10 years.