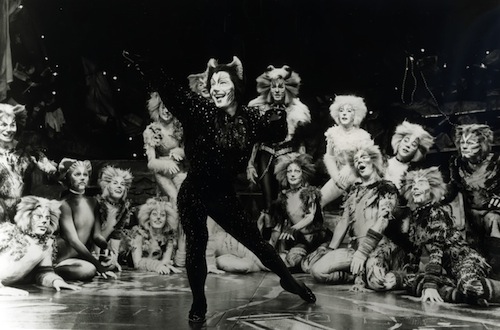 I often joke, and get a lot of mileage, out of my line that “I did CATS back when it was a good credit.”

I don’t mean to demean anyone who performs in the show today, but to be honest, it’s true. In 1986, I was fortunate to be cast as “the Magical Mr. Mistoffelees” in a brand new National Touring company of CATS that traveled all over the country. It was the hottest show on Broadway at the time.

For many major cities, we were the first company of CATS anyone ever saw. It was a very heady experience. I was 22 when I was cast in a principal role in this major, multi-million dollar production. Everywhere we went, we were news. We were the major theatrical production many cities would see that year. It’s just what it was. And I was blessed to be there. To be a part of it.

I had been in NYC for a year, and after audition after audition, I couldn’t get arrested. Not summer stock theater, not dinner theater, not off-Broadway, not Broadway – nothing. I would get to the “final cut” over and over but never get the job.  I remember at the time my grandmother telling me on the phone “you just need to tell someone to give you a chance.” Bless her heart – as if that would do it.

I remember going to my first audition for the show in early January of 1986. A replacement understudy was needed for the Broadway company of the show. This was back when, as an unemployed actor you got up every day and just went to whatever audition there was that day. I went to the audition and did not get the job. But two days later, I got a call from the casting office saying they didn’t get my picture and resume and they would like to “put me on file – would I send them that to them?” OMG! I ran to the mailbox with my requested materials with extra postage on the envelope to ensure it wouldn’t get lost in the mail.

Three months later, a casting call went out for a new National touring company of CATS. Open call. Anyone can come! I never got the call from the casting office saying “we’re holding auditions, please attend.” I guess it got lost in the mail or something. But I didn’t leave anything to chance. I got up the day of the audition, headed down to the call and waited in line at the Cort Theater on Broadway.  There were over two hundred guys there that day alone.

20 at a time, we lined up onstage, where we were asked to step forward, say our name and do a double pirouette. Some were cut, some were kept. I was kept.

Next we were taught a dance combination I later would learn was called “Copeland” from the end of Act One long ass dance number “The Jellicle Ball.” Some were cut, some were kept. I was kept.

As we finished that cut, the creative team asked “those who tumble – and Randy Slovacek” to please stay. The dance supervisor asked that I come back on stage after the gymnasts and do “turns in second.” I had no idea what he meant.

I had been dancing for five or six years at that time, but ballet was not my strongest point. Color me blond, but I was at a loss.

Now here’s a cool fact of history. In 1984, I got my Equity card, while still in college, at Pittsburgh Civic Light Opera doing the amazingly classic “West Side Story” with a cast that was incredible. That cast included today’s Tony Award winners Kathleen Marshall and Rob Ashford in the ensemble. We would become good friends years later.

Anyway, I bring this up because in a moment of incredible generosity Rob – an amazing dancer – reached out to me. Downstairs, under the stage, as we listened to the gymnasts tumbling over our heads, Rob was getting dressed as he had inexplicably been cut. (A beautiful and exciting dancer, it was incomprehensible that he was not kept for consideration. Later I would find out the role the directors felt he was right for was being cut from this new company). As I stood in a corner trying to figure out what on earth was about to be expected of me, Rob stopped to speak to me on his way out the door.

“Fifth position, then second, then fourth position, do a double pirouette then turn with your leg out in second position. Use your plie. USE YOUR PLIE.” If you’re not a dancer, just understand he told me what the hell was at least the approach of what the most important powers that be were about to expect of me. And is something experienced dancers take years to learn.

I’ve never forgotten Rob’s incredible generosity. To this day I call him a friend, and I celebrate that Broadway has embraced his brilliance.

I headed upstairs to the stage. Alone, on the bare Cort Theater stage on Broadway, with just the creative and casting staff in the middle of the audience, I was asked to do technical things I had no history of doing. Sometimes, sheer will power and hope can achieve amazing things.

Over the next two and a half months I was called back five times. Over and over I would dance material from the show, do “turns in second” on an empty Broadway stage – alone. Sweat, dream and pray.

At one point in the auditions, the dance supervisor asked if I was “in class” every day. Chagrined, I paused then told him the truth – I couldn’t afford dance classes. He said “then we’ll pay for them. Go to class everyday.” And they did. And I did. Still with no real indication that I would get the job.

I would go to dance class every day in the hot NYC summer. Between classes, I would stop by the restaurant where Carlye waited tables. Her manager, who took a liking to me, would order food to feed me between classes since I had no money to eat in the city.

It’s amazing that people can appear with kindness sometimes right in the moment when you really need it.

In early July, sitting on the floor of the apartment in Jersey City I shared with Carlye – the closest person I to this day call actual family – I got a call.

We had no furniture. We were “gifted” a sleeper/love seat from which we pulled the 3 inch foam mattress out and laid on the floor to sleep on. We had four plastic laundry baskets that we put socks and underwear in one, t-shirts in another, jeans in another and anything else in the last one. We had practically nothing. We slept on the floor, ate on the floor, lived on the floor.

Andy Zerman, from Johnson/Liff casting called at about 4pm. Sitting on the floor of our empty apartment, I heard Andy tell me on the other end of the phone “you got it.”

No words. None. Tears filled my eyes and I looked up at Carlye. Two seconds passed – and standing above me, from the look in my eyes, Carlye knew. One second later she began screaming. I cried. The next hour is a blank in my memory. I hope everyone at some point in their lives blanks out like I did in that moment.

A young lifetime of hopes and dreams had just come true in a two minute phone call.

What followed was an incredible adventure – rehearsals, costume fittings, tech rehearsals, an amazing opening night in Atlanta, and dozens of opening nights across the country for two years. We were well-taken care of by the best company managers in the business – Brian Liddicoat and Jeff Capitola, whom I would later learn to appreciate for going above and beyond, with amazing compassion and professionalism at a time when I didn’t even know it.

I was reviewed as a “principal” in a major show across the country. In many cities, I got good reviews. For some reason the critic in Cincinnati just hated me. Twice. Go figure.

A very heady experience for a 22 year old dreamer.

I met one of my very best friends – Matt Zarley – who today I call my brother.

I learned every night of a two year run how to own my performance and “live in the moment” onstage.

These are things that shape us for the rest of our lives.

Last night, I attended the 25th reunion of my company of CATS. I love these people. We learned together, grew together and over the years have supported each other as our individual pursuits took us in new and different directions.

In addition to my writing career, I’ve been lucky enough to enjoy a life creating theater as a director and choreographer.  I met the love of my life and we’ve been together for almost 17 years.  I got cancer and beat it.

Matt is a celebrated recording artist. Leslie Ellis, our amazing ‘Grizabella’ has a successful recording and songwriting career as well.  I could go on and on. Mark Agnes is now an Emmy Award winning costumer. Aja Kane, Christine Toy Johnson, Beth Swearingen, Randy Clements, Joann Hunter, Tony Bova, Joanna Beck, Kari Nicolaisen, all of them – on and on and on I can go.

I’m so proud of this family that was formed and shaped and molded and given to me 25 years ago.

It’s equally emotional and humbling to be able to look back and know the value of a “moment.” An audition on an April day on an empty Broadway stage that would forever shape who and what I would be and become.

Just like 25 years ago on that hot July afternoon when a momentous call came, tears come to my eyes. I get to do that. I’ve earned it. I lived this life and got to here.

As I headed to the reunion last night, I couldn’t help but sing to myself:

It was a ball kids. A Jellicle ball.