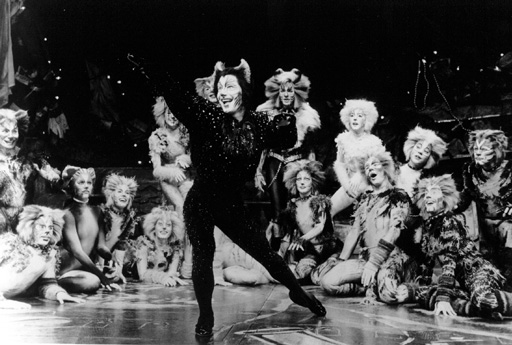 Thirty-three years ago today, Broadway history was made when Andrew Lloyd Webber’s CATS opened at the Winter Garden Theater.

Come awards season, the production would win 7 Tony Awards, and a slew of other honors.

The show holds a special place in my heart as, after struggling mightily during my first year as a young actor in NYC, I was cast as “the magical Mr. Mistoffelees” in the brand new second national touring company. For two years, I earned my first decent pay check as an actor, traveled the entire country and had the most amazing time a 23 year old can have.

I fell in and out of love; I learned how to “work” on a long running show (it was easily the most physically demanding show I would do); and I gained wonderful, important friendships that hold strong ties today.

Bonus – although I did not do the show with her, over the years I’ve developed a terrific friendship with the show’s Tony Award winning “Grizabella,” Betty Buckley. I saw her in the role and she, along with the entire production, held me transfixed for almost three hours. The memory (you see what I did there, right?) lives on vividly in my head even today. I love that we share that bond.

Congrats to everyone who helped create this art that employed and entertained so many people even today.

Much credit to Trevor Nunn (the original director), Gillian Lynne (the original choreographer who SHOULD have won the Tony Award that year), T.S. Eliot (the poet who’s work the show is based on), and especially David Taylor, T. Michael Reed and Stanley Lebowsky – the supervisors of the show who staged our company.

Me as Grizabella in CATS, which opened 33 years ago today at The Winter Garden on Broadway. What a night! ❤️
A photo posted by Betty Lynn Buckley (@blbuckley) on Oct 7, 2015 at 11:21am PDT