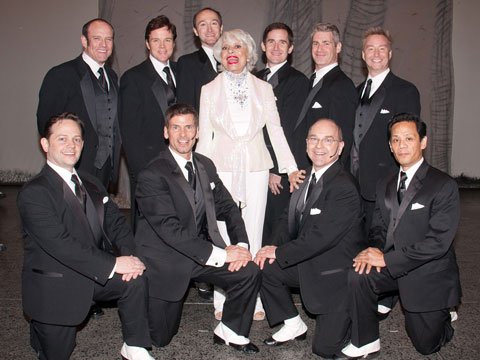 In late May 1994, I was an unemployed actor – again – in NYC. Upon checking the mail on a Wednesday morning, my last unemployment check had arrived and I had no acting job in sight. For years I had worked steadily and supported myself as an actor. It looked like that career was about to take a break.

It seemed clear I was headed back to “table-waiting” land. I had spoken to friends who owned a successful candle store on the upper west side of manhattan who offered a part time job.  Thankful but not thrilled.

I opened the trade papers and saw a casting call for a last minute replacement for the upcoming Broadway revival of “Hello, Dolly!” starring Carol Channing. The show would tour for several months but would come into Broadway. I was avoiding touring at that time as I was becoming the ‘National Tour King’ with six National tours under my belt but no Broadway debut yet at that time.

But finances are finances. Mr. American Express wrote me every month and always expected me to write back.

I headed to the audition because, well,  that’s what unemployed actors do.

Over 125 dancer/actors showed up for that one position. We danced one combination and the creative team quickly cut to 30.

We danced another combination, and another cut – to 15.

We were asked to sing next. It was about this time I heard people saying plans had been made for this slot already and so they were looking for someone the same size as the guy originally cast – who was six feet tall. (p.s. I’m 5’8″).

I headed in to sing for the director, Lee Roy Reams, and the choreographer, Bill Bateman. I have a fairly big voice and with nothing to lose I sang with abandon and no fear knowing I was soon to be ‘candle shop bound.’

Upon finishing my song, I started walking towards my dance bag near the door. Lee Roy said “wow – where were you in February?” and out of nowhere I replied, “well, I was working then but my last unemployment check is in that bag on the way to the bank and ‘baby needs a new pair of shoes.'”

I smiled and exited the room. Least I got a laugh.

A quick subway ride home and I was soon laying on my couch thinking about candles and looking for a table waiting job.

The phone rang – on the other end of the phone I heard “are you sitting down?”

I paused and said “I’m sorry?”

“Are you sitting down?”

I looked out my living room windows thinking I was being watched as in Hitchcock’s “Rear Window.”

It took about four seconds and I suddenly thought “Dolly?”

“You got it – rehearsals start in five days!”

And so began a surprise journey that Cornelius from “Hello, Dolly!” would have said “it’s an adventure, Barnaby!” – an adventure that introduced me to Carol Channing, Lee Roy Reams,  Jerry Herman, a new theatrical family,  “Hello, Dolly!” and my future husband.

Over the next 22 months not one member of the show left – we were all a very happy company. The show was beautiful, audiences loved it and Carol Channing was every inch the great Broadway star you wanted her to be.  And warm.  And very funny.

Carol joked and laughed with all of us.  She always made time to meet our husbands, wives, girlfriends, boyfriends and families.  When time permitted she would plan and pay for events for the whole company as we traveled all over the country.

She would buy out seatings of movies complete with all the treats you could eat; a cruise down the River Walk in San Antonio;  Thanksgiving and Christmas dinners; so many things she didn’t have to do but would as the the star of the show and matriarch of the family.

Finally landing in NYC on Broadway, we had a dream opening night where New York audiences gave Carol and the show standing ovations, and Lee Roy stopped the band playing at the opening party to read the rave review from the New York Times declaring among other things “Celebrate her!” referring to Carol.  As an actor you dream of things like this.

After Broadway, I was asked to stage the choreography for the post-Broadway national tour. I supervised the tour and among my duties was giving notes to Carol – imagine that.  I have to say she welcomed any input I might have, although believe me, it was never more than small technical notes about spacing or some such thing.

She was always gracious and the picture of professionalism.  And funny.

“Hello, Dolly!” remains a part of my life after all these years.  In the past 14 years I’ve staged several companies of “Dolly” and a few months ago Jerry Herman – the gentle giant – called me to personally ask me to choreograph the upcoming Broadway revival. More on that when it happens.

This past December, I got the chance to dance again on Broadway in a tribute to Carol at the ‘Gypsy of the Year’ event with several former cast members from “Dolly.”

During rehearsals, we were asked to share some memories of working with Carol for a documentary being made about Carol’s life.  What I thought would be a few minutes turned into a three hour “love fest” about Carol.

I was emailed a few weeks ago by the director of the documentary that the film would make its debut at the Tribeca Film Festival. Back again to NYC to attend the world premiere.

This past Saturday afternoon, I got to sit and watch the documentary with the very first audience – including my former “Dolly” cast mates Julian Brightman, Halden Michael, Bobby Randle, Bill Bateman and Kevin Burrows.

Over and over throughout the film we grabbed each other’s knee or nudged one another when Carol would do something so “Carol.”  When pictures or video of our “Dolly” company came on screen we all straightened up, so proud to have been a part of a great adventure.

“Carol Channing: Larger Than Life” is a fantastic love letter that beautifully captures not only Carol’s amazing career, but her love of the theater, love of life and love for her husband. Dori Berinstein, the director, did a terrific job presenting the story that IS Carol Channing. I, and the audience, loved it.

And yes, several parts of our “love fest in December” were used. I’m so glad we got to have our love for her captured forever. Imagine my surprise when this moment came near the end of the film:

After the screening, the “Dolly” boys were invited to come on stage and share in the love.  It was very, very cool.  And wonderful to celebrate Carol again.

“Hello, Dolly!” was my first Broadway experience and that cast was truly a family. We still are today.  Every Broadway cast doesn’t find the connection we did.

We worked hard together doing what we love to do.  “Hello, Dolly!” was a tough show to do – this wasn’t a walk in the park.  But the people, personalities and talent inspired me every day.  Even when I stage the show today, it’s their faces I see – that was Julian, that was Bobby, that was Kevin…  I see them the whole time.

I love to say “Hello, Dolly!” is the gift that keeps giving.  In addition to many gifts, like Carol finding the love of her life, I found mine through “Dolly.” A great adventure that is still ongoing.

I love these folks.  I’m reminded of that every time I walk into a room and see them.  No matter how many years pass – I smile.

And no one more than Carol.  We love her.  We love being near her.  And so do the audiences.  Still.

Check out the documentary “Carol Channing: Larger Than Life” on Amazon.