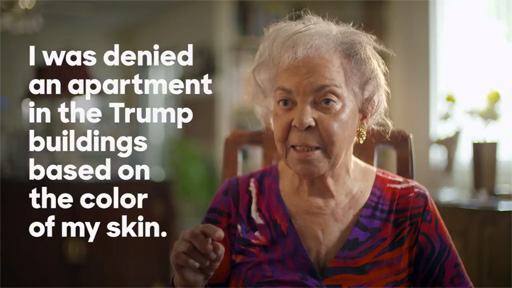 Meet Mae Wiggins. She is a woman of color who was told by the Trump Corporation that there were no apartments available for her to rent. When she took her suspicions that they were lying to her over to the New York Human Rights Commission, they sent a white couple, per the standard practice of the time, to the property only to learn that there were, in fact, vacancies and the white couple was more than welcome to rent one of the units.

Among the many shocking claims in Hillary Clinton‘s latest ad, which features Wiggins, viewers learn that after Donald Trump took over the business from his father, Trump personnel were instructed to write a “C” for “colored” on the housing application of any non-white prospective tenant. That came from Elyse Goldweber, an attorney on the Justice Department’s eventual case against Trump. A New York Times piece from August revealed that Trump’s father, Fred Trump, simply dealt with applications from people of color by instructing his staff to put them in a drawer and leave them there.

“My name is Mae Wiggins. I was denied an apartment in the Trump buildings based on the color of my skin.” pic.twitter.com/ds8NkkV0T2