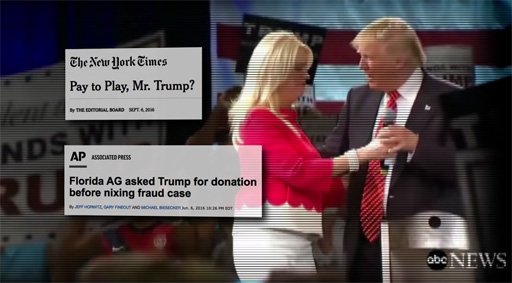 The Clinton campaign released this new campaign ad just hours after the New York State Attorney General’s announcement that he will be investigating the Trump Foundation for possible illegal or corrupt practices.

“You’ve probably heard Trump talk about the Clinton Foundation, but you might not have heard that while he attacks one of America’s top charities, his foundation has been fined for an illegal donation,” a narrator intones, as graphics showing the Clinton Foundation’s top ratings from Charity Watch, GuideStar and Charity Navigator are displayed on screen.

“She cashed the check, blocked the case, and he tried to cover up the donation,” the ad alleges, before concluding with a picture of a hard hat-wearing Trump grinning in front of workers. “So, when you hear Donald Trump talk about corrupt politics, remember which candidate actually practices it.”

You’ll recall that in 2013, Florida Attorney General Pam Bondi’s office announced it was looking into joining a class action suit against Trump University. At the same time, Bondi asked Donald Trump for a campaign donation.

Three days later, Trump’s $25,000 check arrived in Florida. Within days Bondi announced she would not be following up on the Trump U. action.

Put another way, imagine you were robbed. Before the robber is charged he makes a campaign donation to the police chief, and the next thing you know charges are not filed and he’s set free.

Smell right to you?