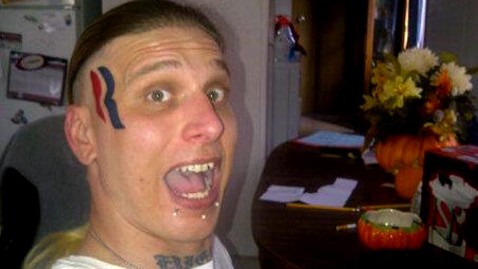 As we get further away from the 2012 election, some of the statements and issues of the campaign begin to fade away.

And then there’s Eric Hartsburg, who got the Romney ‘R’ logo tattooed on his face for an eBay bid of $15,000. Eric will have a constant reminder of his losing candidate probably for the rest of his life.

However, Hartsburg says he’s cool with that.

“I am college educated, and I am not an idiot,” Hartsburg, a professional wrestler, told ABC News. “Getting the tattoo was a decision that I made, and I am cool with.”

Hartsburg, 30, who got the tattoo after auctioning off the prime real estate on his face, said, “Of course I am disappointed about the election results. I wanted Romney to win, obviously, but I am proud of the voters and the record turnout in certain places. And most of all, I am proud of the effort that I made.”