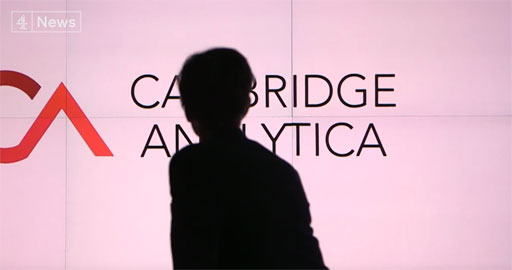 Britain’s Channel 4 has done an in-depth undercover investigation on data mining company Cambridge Analytica, which claims it handled “all the digital campaign, the television campaign and our data informed all the strategy” for the Trump campaign.

The shadowy company boasts their efforts and expertise with data was the key to Trump’s to victories in swing states like Pennsylvania, Michigan and Wisconsin with a razor-thin margin of “40,000 votes.”

CA says their micro-targeting of social media users in those three states alone gave Trump his victory in the electoral college system, despite losing the popular vote by more than 3 million votes.

In the past few days, Cambridge Analytica has come under fire for “harvesting” millions of Facebook users private information without permission.

As a result of the ongoing investigations, chief executive Alexander Nix has been suspended by his company.

This is the third of a series of reports.

If you don’t want to watch the full 17 minute report below, just take in the first four or five. Quite eye-opening.

Last year during a tour to promote her book What Happened, Hillary Clinton spoke to Channel 4 about this “new” kind of data-driven campaigning and how it may have affected the outcome of the election.

An undercover investigation has revealed how Cambridge Analytica claims it ran “all” of Donald Trump’s digital campaign – and may have broken federal election law. Executives were secretly filmed saying they leave “no paper trail.”#CambridgeAnalyticaUSA https://t.co/BOA0BXjD5C