Buzzfeed reporter Patrick Strudwick has done a deep dive into “sex for rent” arrangements which target young gay men looking to exchange sexual favors for a roof over their head.

Strudwick investigated a Facebook group called “Gay Houseboy’s and those who hire them” which seems to be a clearinghouse for communications between landlords and young men in desperate straits willing to do what they have to for housing.

The group describes itself thusly:

This group is for gay men seeking gay boys to work for them as houseboys, and for gay houseboys seeking employment. No Nude pics, no “hookup” posts, no spam!

“Looking for a white male 18-25 to come and join our household for a live in position,” reads one post on the Facebook group. “General duties will include cleaning, walking dog, shopping, cooking and general house projects… This position would ideally include sex and lots of affection from our boy.”

Another is simply a photograph of a young naked man, with his penis exposed, standing by a Christmas tree with the words: “ISO [in search of] True HouseBoy 18-25 White Slim Clean.”

“Live in the heart of Hollywood” is the promise in a further post, from a landlord seeking a “houseboy/personal assistant”. The landlord boasts, “My company deals with a lot of high profile clientele”, asks that respondents send photographs, and specifies, “Prefer young (but legal age) and very uninhibited types. Boy-next-door but with a wild side.”

Others insist on respondents replying with “face and body photos”, or have strict age limits, seek houseboys “with benefits”, or are suggestive of controlling dynamics. “Married couple here 40 and 46 seeking our forever boy for total and complete ownership,” says one.

Buzzfeed reached out to several of the advertisers undercover. One explained why he posted his ad: “I just want to stop having to go online all the time for sex.”

In speaking with several of the young men who had become involved in these arrangements, Strudwick reports many found themselves “raped, beaten, drugged, infected with HIV and treated as domestic slaves.”

When approached by BuzzFeed to respond to issues relating to this group, Facebook initially replied promising that a representative would comment but Buzzfeed reports no response ever materialized. 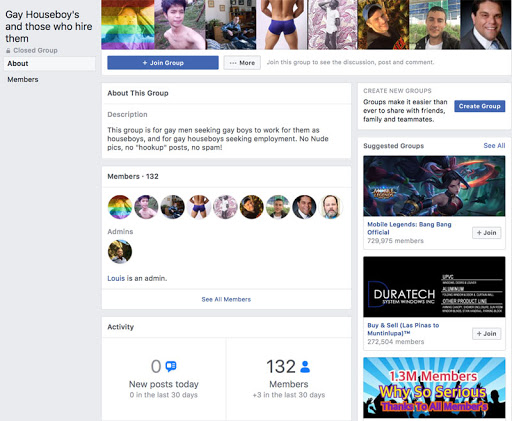 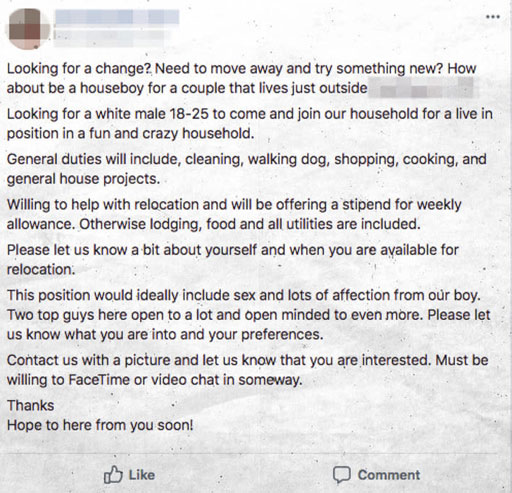 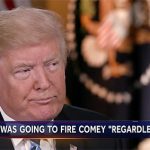 Let's Go To The Video Tape: Trump Contradicts Himself On Comey Firing 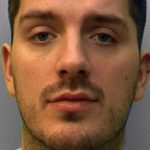 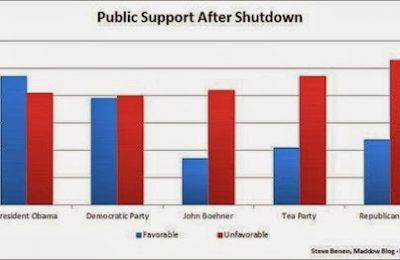 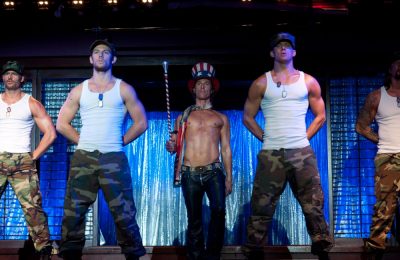 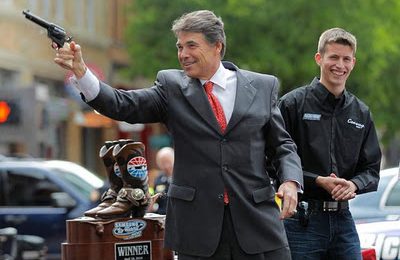