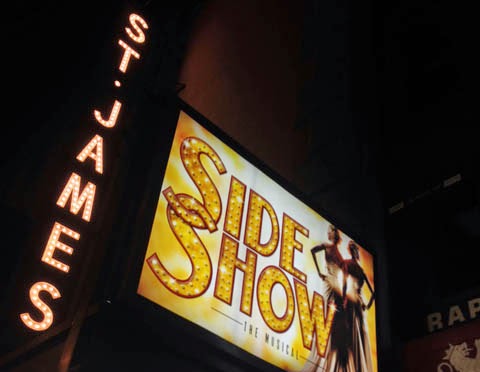 How cool is this?

On the evening of November 17th, theater fans were treated to a live viewing of the Act One finale of the Opening Night of Side Show in Times Square.

According to a representative for the production, a specific slot time was permitted for Clear Channel to broadcast the finale with sound in Times Square. As is typical with many Broadway opening nights, Side Show got off to a late start. The performance, which was to begin at 7 PM, didn’t raise its curtain until about 7:25 PM, meaning that the act one finale “Who Will Love Me As I Am?” would not occur until after 8 PM. Technically, the song would not make its 7:45 PM live call.

Days before opening, a back-up tape of the rousing power ballad had been prepared by the show’s producers in the event of such circumstances or other technical snares. That previously-taped performance is what ultimately aired at 7:45 PM in Times Square.

“There was no mechanism in place with which to deliver fans the message that the performance was pre-recorded, nor did the production deem it necessary as it still delivered an exciting moment with footage of a live performance,” a spokesman for the production said in a statement.

The revival of Side Show enjoyed excellent reviews. Read the notices here.

And you can watch a video of the “live” broadcast in Times Square below.