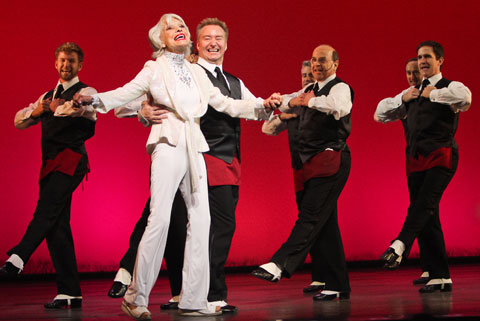 Called “the season’s most dazzling talent show,” Gypsy of the Year is easily the biggest party in town with appearances by dozens of Broadway and Off-Broadway’s most popular shows and performers.

This year, a rollicking opening number will feature a reunion of the original cast of Grease in a special 40-year anniversary tribute. Among the stars returning to the stage from one of the most popular musicals in Broadway history are Barry Bostwick (Danny), Carole Demas (Sandy), Adrienne Barbeau (Betty Rizzo), Alan Paul (Teen Angel/Johnny Casino) and Walter Bobbie (Roger).

Gypsy of the Year is the culmination of six weeks of intensive fundraising by Broadway, Off-Broadway and national touring companies. It’s also a sensational display of the most talented singers and dancers in the chorus of shows (known as “gypsies”). Awards are presented to the top fundraisers and for the best presentation during the two shows.

If you are in NYC on December 5 or 6, go see this amazing theatrical experience.