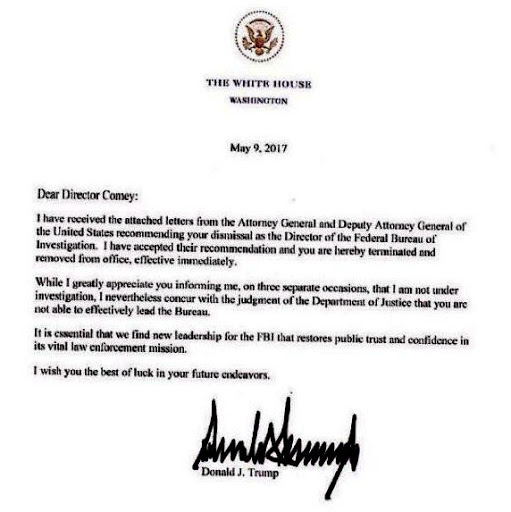 The firing comes at the recommendation of Attorney General Jeff Sessions. See Sessions’ letter below,  along with Trump letter of termination to Comey.

It is odd that (but not un-Trumpian), in his letter to Comey, Trump co-mingles statements of “not being investigated” in the same sentence he fires the man leading that investigation. He wrote that for the masses, not Comey.

Every time someone gets close to Trump and Trump adviser’s ties to Russia, the president does something like this.

I wonder if Trump thinks this will end investigations into Russian ties…? 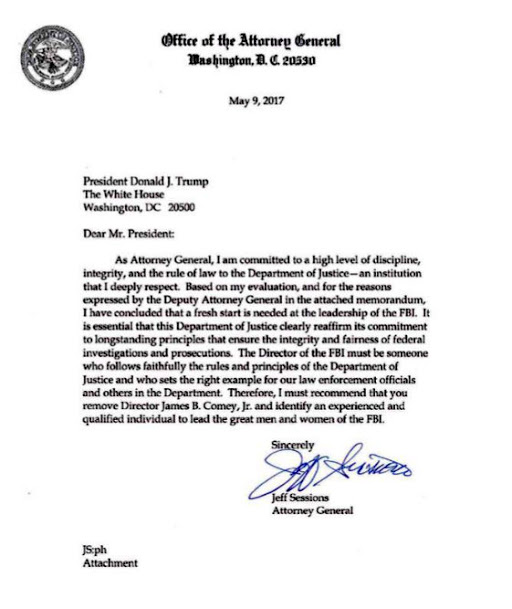 Of course, if mishandling the Clinton investigation was actually the reason for Trump to fire Comey, he should have done it in January.— Nate Silver (@NateSilver538) May 9, 2017

So, Pres. Trump says he fired James Comey for something he praised Comey for at end of campaign: how he handled Clinton email investigation.— Hallie Jackson (@HallieJackson) May 9, 2017

The only thing that could do more to erode faith in independence of FBI than Comey staying is Comey being fired. This is 100% political.— Brian Fallon (@brianefallon) May 9, 2017

WH sending out press coverage of Dem criticism of Comey won't wash away the stench of coverup. This was a disastrous decision.— David Axelrod (@davidaxelrod) May 9, 2017