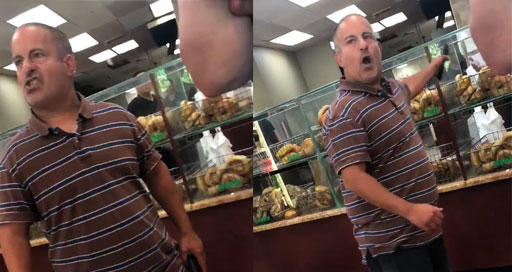 UPDATE: Some folks got creative… LOL

Totally don’t RT this so it ends up on the news or some shit:

Note: When ranting at complete strangers in a bagel shop about nothing that has to do with them, if you dare someone to “Go ahead and attack me” – it just might happen.

Apparently, the man has had some bad luck on dating apps with women having issue with his height of five feet tall and had been taking out his rage at everyone at the bagel shop.

I don’t think his issue is his height, just saying.

And by the way, as the saying goes, “Don’t let your mouth write checks your ass can’t cash.”

so in bagel boss this morning, the misogynistic douchebag seen in the video was degrading almost all of the female staff as well as other patrons. fuck this guy. pic.twitter.com/LZh1Uk4UXZ

If you guys wanted to know what happen next, here ya go pic.twitter.com/jOHzispksW