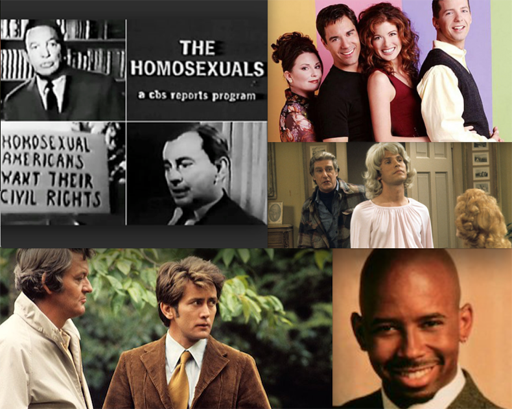 Matthew Rettenmund at Boy Culture has compiled an amazing list of LGBTQ characters and/or mentions of homosexuality on TV from 1920-2000.

It’s an incredible list of firsts and notable moments in queer television history.

LGBTQ people have been around forever, albeit not always identified as such.

When we began to declare ourselves, especially when the media went national and electronic and visual, we began our ongoing struggle for tolerance and, eventually, acceptance, in order to possess a sense of self-esteem that would be backed up by legal rights.

It’s been messy, it’s included some unfortunate missteps, and it’s always been a mix of frustrating, exhilarating, contentious and — in the case of the arts — insulting, entertaining or both.

I decided, in early 2017, to compile a list of TV moments featuring real or fictional LGBTQ people, major and minor (aren’t they all major when you’re a closeted kid in the Dust Bowl?) appearances that demonstrate the trajectory from “the love that dare not speak its name” to “we’re here, we’re queer” to GBF to where we are now, when LGBTQ characters are often included on TV and are often multi-dimensional, and when real-life LGBTQ people are all over television.

The list includes the first televised reference to homosexuality, a 1954 news program “Homosexuals and the Problem They Present,” the first TV appearance by a cross-dresser, the first explicitly gay character in a TV drama and much, much more.

I really encourage you to click over to Boy Culture and take a read.

Rettenmund says he hopes to turn the research into a book.