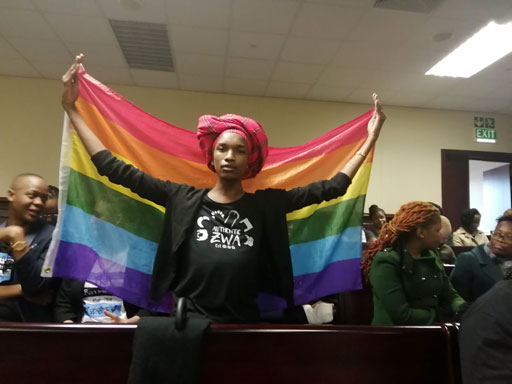 In a major victory for LGBTQ rights, Botswana’s highest court has struck down the African nation’s laws that made same-sex relations a criminal act.

The packed courtroom erupted in cheers as the unanimous ruling was announced.

“Human dignity is harmed when minority groups are marginalised,” said Justice Michael Leburu as he read the historic ruling. “Sexual orientation is not a fashion statement. It is an important attribute of one’s personality.”

“The state cannot be a sheriff in people’s bedrooms,” he added.

Even though Botswana is considered one of the most stable and democratic countries in Africa, homosexuality has been illegal under the nation’s penal code since 1965. Someone found guilty under the laws faced jail time of up to seven years.

More than half of the countries in Africa have some form of anti-homosexuality laws in place.

Today’s news stands in sharp contrast to last month’s disappointing ruling in Kenya where that country’s high court found its anti-homosexuality laws were not unconstitutional.

Scenes of joy as decriminalization Of homosexuality made official in Botswana #repeal164 pic.twitter.com/pBch7o6kdh

History made in Botswana
Human rights for all. pic.twitter.com/Jlv7KisZYq

It couldnot have been a better day. What a day… We are all basking in the glory of human rights for all.@legabiboadvo@leshielovesong @ratanangMosweu pic.twitter.com/oGoO6uGDnw