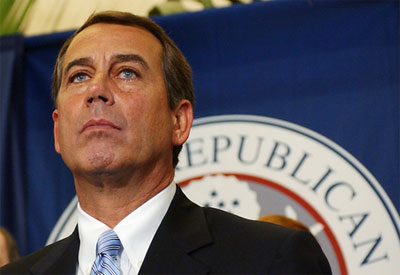 House Speaker John Boehner released his plan today that cuts $1.2 trillion from the budget and kicks the can down the road a few months – again – so the budget/deficit issue can be addressed AGAIN next spring.

Senate Majority Leader Harry Reid has his own plan to cut the deficit $2.7 trillion and raise the debt ceiling.

Reid’s proposal would establish a congressional committee comprised of 12 House and Senate members to consider additional options for debt reduction. The committee’s proposals would be guaranteed a Senate vote with no amendments by the end of the year.

Democrats are vehemently opposed to the idea of holding more than one vote to raise the debt limit through the 2012 election, arguing that such a requirement is politically unrealistic and could prove to be economically destabilizing.

As leaders from the two parties continue to bicker, analysts warn financial markets are growing increasingly nervous about the prospect of a national default. The Dow Jones Industrial Average dropped more than 100 points almost immediately after opening Monday morning, although it later cut that loss.