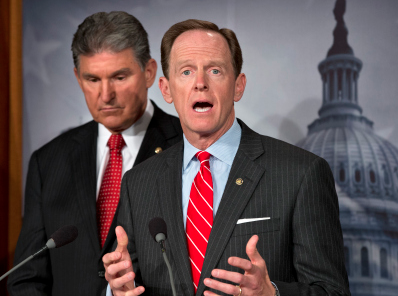 I know many folks were hoping for sweeping changes to gun control laws, but this may be as good as it gets this time.  And it would be a shame to have nothing addressed after the tragic shooting at Sandy Hook.

Toomey, unlike several members in his party, said he didn’t believe expanding background checks was akin to gun control.

“I’ve got to tell you candidly, I don’t consider criminal background
checks to be gun control,” the GOPer said at a press conference
Wednesday explaining the deal. “I think it’s common sense. If you pass a
criminal background check, you get to buy a gun, no problem.”

While the compromise doesn’t include universal background checks, which is being pushed for by President Obama and is  favored by 90% of Americans,
it does expand background checks to cover gun shows and online sales of
firearms. Failure to comply would be classified as a felony.

Gun sales between friends and
acquaintances would be exempt.

I think these are the right two guys to bring this forward since Pennsylvania and West Virginia are serious “gun” states.  Plus, the two senators here are more moderate members of their parties.  I think if anyone is going to help get ANYTHING done on common sense gun policy, it will be these two guys.