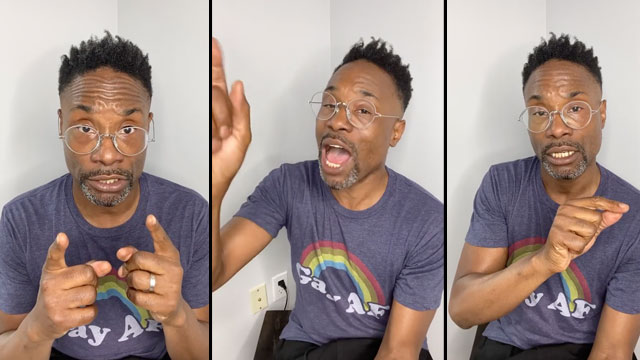 Tony/Grammy/Emmy Award-winner Billy Porter took to Instagram this week to share his candid, and sometimes blistering, “Message to America.”

Porter,  who doesn’t demure from expressing his opinions, begins by calling out white Americans who continue to deny systemic racism in the United States.

The Pose star then shifts his attention to the African-American community noting the violence committed by black men against LGBTQ people, especially transgender women of color.

“My basic human rights have been up for legislation every single day that I have had breath in my body from all sides,” says Porter.  “And by that, I mean that the black community’s relationship with the LGBTQ+ community is appalling at best and eerily similar to that of white supremacists versus black folk.”

“Hear me, black people, and hear me well – I’m calling you out right here and right now,” he continued. “You cannot expect our demands of equality to be met with any real legislative policy and change when y’all turn around and inflict the same kind of hate and oppression on us. The tragic reality here is that black trans, as well as gender non-conforming, women and men are being killed in the United States by cis black men to such a degree that it is nearly the worst emergency for trans women on the planet.”

“The murders of black trans women by black men since 2016 have helped drive the most violent period for LGBTQ+ people on record,” he added. “Just this past week, during the riots, during the peaceful protests, Iyonna Dior was brutally beaten by a gang of black men while trying to peacefully protests for our rights.”

“LGBTQ+ black folks are black people, too! Our lives matter, too! So this is my response to those of y’all who don’t understand that: F*ck you! And, yes, I am cussing. It’s time for cussing.”

Speaking to “all my homophobic and transphobic brothers and sisters,” Porter was clear and direct in his message: “Get your f*cking houses in order.”

Porter’s remarks refer to a transwoman, Iyonna Dior, who was beaten by a group of more than 20 men by a group of onlookers. She managed to escape, though not before sustaining heavy bruising and swelling.

The actor also addressed the upcoming presidential election in no uncertain terms: “We have two clear choices in November: vote this motherf*cker and all his cronies out of office, reset, and begin the American experiment again at zero, or not.”

“It’s time for change, and this time, change for good,” said Porter in closing.