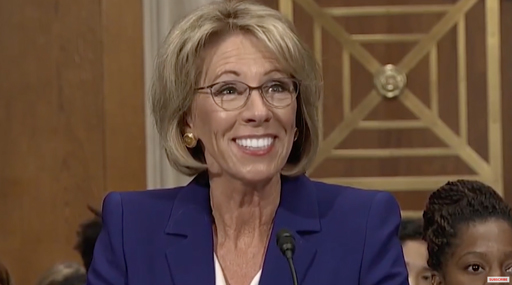 Although it appears she was caught plagiarizing her answers in written responses to questions from Senators, Education Secretary Betsy DeVos was approved out of the Senate Health, Education, Labor and Pensions Committee by a vote of 12-11.

President Donald Trump’s nomination of Betsy DeVos to be education secretary was sent today to the full U.S. Senate for confirmation on a tight 12-11 party line vote in committee after a fractious debate over her qualifications.

The vote on the nomination of DeVos, a controversial figure in Michigan politics and education, raised hackles among Democrats in the Senate, who argued throughout a contentious hearing two weeks ago and today’s debate that she knows too little about federal education policy and would undermine public schools.

Republicans, in the majority in both the Senate Health, Education, Labor and Pensions Committee and the full Senate, defended her as being committed to children even if she has been a key supporter of school choice and vouchers — though two GOP members signaled that their votes in the committee today did not necessarily guarantee support on the Senate floor.