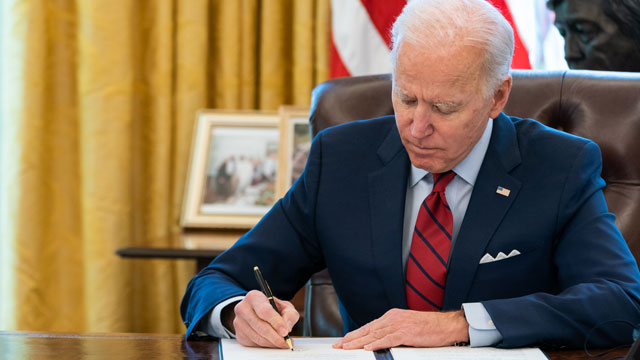 From the White House:

Today, we honor and celebrate the achievements and resiliency of transgender individuals and communities. Transgender Day of Visibility recognizes the generations of struggle, activism, and courage that have brought our country closer to full equality for transgender and gender non-binary people in the United States and around the world. Their trailblazing work has given countless transgender individuals the bravery to live openly and authentically. This hard-fought progress is also shaping an increasingly accepting world in which peers at school, teammates and coaches on the playing field, colleagues at work, and allies in every corner of society are standing in support and solidarity with the transgender community.

The Biden-Harris Administration is committed to fulfilling the promise of America for all Americans by stamping out discrimination and delivering freedom and equality for all.

To ensure that the Federal Government protects the civil rights of transgender Americans, I signed, on my first day in office, an Executive Order on Preventing and Combating Discrimination on the Basis of Gender Identity or Sexual Orientation. Today, we are proud to celebrate Transgender Day of Visibility alongside barrier-breaking public servants, including the first openly transgender American to be confirmed by the United States Senate, and alongside patriotic transgender service members, who are once again able to proudly and openly serve their country. We also celebrate together with transgender Americans across the country who will benefit from our efforts to stop discrimination and advance inclusion for transgender Americans in housing, in credit and lending services, in the care we provide for our veterans, and more.

To more fully protect the civil rights of transgender Americans, we must pass the Equality Act and provide long overdue Federal civil rights protections on the basis of sexual orientation and gender identity. The Equality Act will deliver legal protections for LGBTQ+ Americans in our housing, education, public services, and lending systems. It will serve as a lasting legacy to the bravery and fortitude of the LGBTQ+ movement.

Vice President Harris and I affirm that transgender Americans make our Nation more prosperous, vibrant, and strong. I urge my fellow Americans to join us in uplifting the worth and dignity of every transgender person.

NOW, THEREFORE, I, JOSEPH R. BIDEN JR., President of the United States of America, by virtue of the authority vested in me by the Constitution and the laws of the United States, do hereby proclaim March 31, 2021, as Transgender Day of Visibility. I call upon all Americans to join in the fight for full equality for all transgender people.

IN WITNESS WHEREOF, I have hereunto set my hand this thirty-first day of March, in the year of our Lord two thousand twenty-one, and of the Independence of the United States of America the two hundred and forty-fifth.