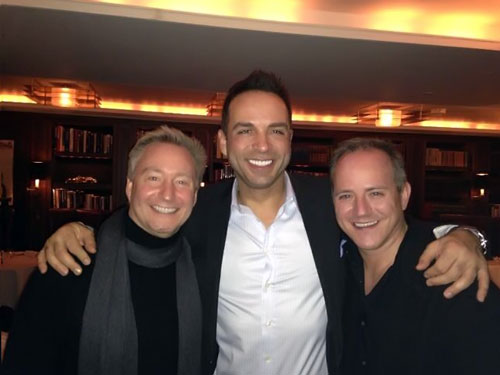 First night in London, and we saw the fantastic Betty Buckley in the UK premiere of Jerry Herman’s DEAR WORLD at the Charing Cross Theatre. The show AND Betty were terrific! Seeing this beautiful gem of a show on stage finally was worth the wait. And Betty knocked it out of the park with each scene and song. Highlights were her tender readings of “I Was Beautiful,” “Kiss Her Now” and of course “I Don’t Want To Know.” Betty’s “Madwoman” was both hilarious and touchingly vulnerable.

Plus – you travel around the world to run into friends 🙂

Walking out of the theater we realized our friend Billy Stritch saw the same performance. He’s in town as music director for Liza’s sold-out concert tonight here in town. So he joined us for late dinner with Betty and friends at The Ivy.

Ah, The Ivy! Great London atmosphere and the staff was so kind to endure all of the picture taking and seat-switching as the conversations went on. I can’t repeat anything said at the dinner because apparently membership to the club means nothing you hear there can be passed on later. Some rule Betty explained to us. Oops – I think I just passed something on…. Erase, erase, erase…