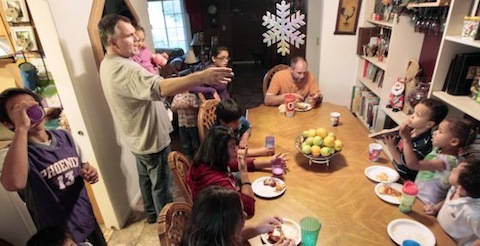 This is a really wonderful story from AZCentral.com about two gay dads who have adopted 12 children over the past few years and created a warm, fantastic family by choice.

It’s 11-year-old Andrew’s turn to set the table for dinner, and he deals out 14 paper plates as if they were playing cards. Marcus, 5, climbs onto a bench and announces, “It smells like pancakes.” His brother, 3-year-old Cooper, counters, “I think it smells like chicken.”

“It smells like Ambrose,” says Logan, 7, climbing in between Cooper and their sister Ambrose, who’s 4. She glares at the laughing boys. Actually, it smells like spaghetti. A big pot of homemade sauce is bubbling on the stove.

The six littlest children fit on the 9-foot-long bench along one side of the table. Andrew and the four other big kids sit in chairs on the other side. Olivia, the baby of the family, is in a high chair. Daddy sits at one end, Papa at the other.

Steven and Roger Ham are raising 12 children, all adopted from foster care, in Arizona, one of the most unlikely places for two gay men to piece together a family.

It’s a terrific testament to the daily business that families go through and what it means to the kids to have a loving home.

With so many debates about whether gay couples should be able to adopt, this tells the true tale. Kids need love and they don’t judge it. They just accept it.