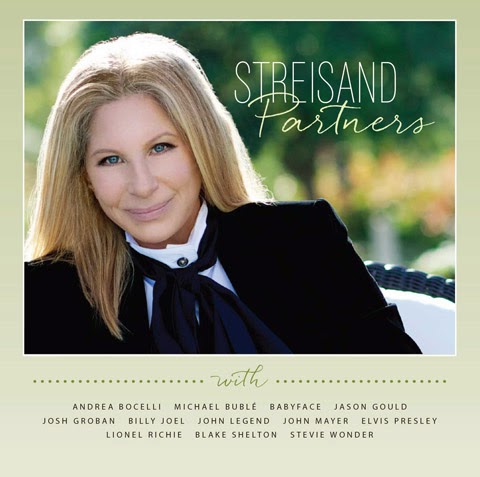 In doing so, Streisand becomes the only recording artist with No. 1 albums in each of the last six decades.

Hearing the news that “Partners” entered the charts at #1 was an overwhelming feeling of joy!!

Being told that I’ve had #1 albums in six consecutive decades makes me feel truly blessed and grateful to have such loyal fans. I feel you rooting for me and I so appreciate all of your energy and support.

It’s especially sweet since I get to share this moment with my wonderfully talented partners who I had the pleasure of singing with: Michael Bublé, Stevie Wonder, John Mayer, Babyface, Billy Joel, Blake Shelton, Lionel Richie, Andrea Bocelli, John Legend, Josh Groban, my beloved son Jason Gould…and last but not least, Elvis Presley…forever The King!

Finally, thank you to Rob Stringer and my Columbia Records family, my manager Marty Erlichman, my creative team on this project – Kenny Edmonds, Walter Afanasieff, Dave Reitzas, Bill Ross, and Jay Landers…and Ken Sunshine for getting the word out… we did it guys!!

The debut is also the largest first week sales total for a female artist in 2014.

Barbra’s first #1 album was People, which hit the top in October 1964.