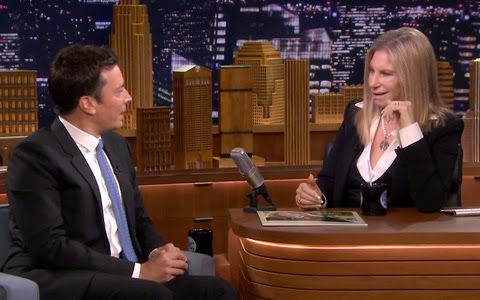 Barbara Streisand appeared on The Tonight Show for the first time in over 50 years last night. A fact that seemed particularly scary for Jimmy Fallon as he explained to Babs that he really expected her to whirl into the studios as a difficult diva. Babs didn’t seem to understand why.

I would guess there was a pre-arranged agreement that Babs would sit in the host’s chair as she is known to favor her left side.

She did sing a medley from her new album Partners using Fallon as a stand-in for Elvis, Blake Shelton and Michael Buble, putting a spin on the rather historic appearance.