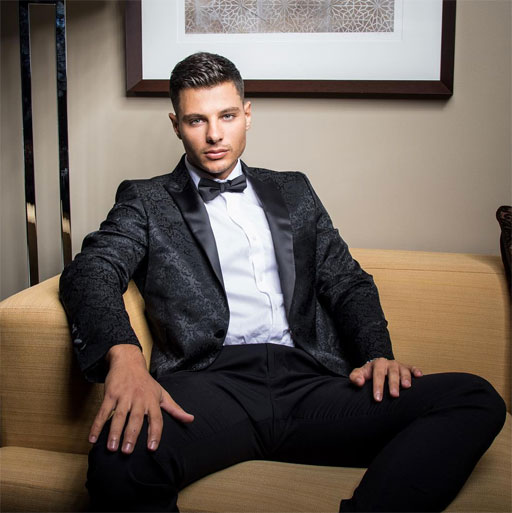 This marks the first time an Aussie has taken the coveted title since the competition began ten years ago.

According to the official website, the aim of the global contest is to “inspire and empower gay men to come together in a public performance that would show the world that being gay encompasses a broad spectrum.”

Over an intense four days, contestants compete in several categories including a sports challenge, a photo shoot competition, a runway fashion show and a swim suit competition.

“I was overwhelmed and it’s really an honor. For Australia, it gives us visibility and recognition, but it also gives us permission to help the world now. With the title behind me, I’m able to shine a light on different LGBTI issues across the world,” said Bruno.

The handsome 26-year-old says he wants to use his title to help bring the LGBTQ community together by addressing issues like femme shaming, body issues, lesbian discrimination at pride events and more.

Bruno says he became close to his competitors over the course of the contest telling Attitude Magazine, “The fact [is] that you are in a competition and you’re also like a family at the same time, which is quite interesting because you are competing against each other but also each other’s best friend as well.”

“I’ll keep in touch with all of these guys, they are now part of the family when we travel to their countries,” he added.

Check out more pics of the woofy Mr. Jordan Bruno below.

For the first time in history, Australia has the title of Mr Gay World 2018 🇦🇺🏳️‍🌈 . Thank you to everyone who voted for me, none of this would of been possible without your tireless support 😭👏🏽 . Let’s change the world 🌏🌈 . @redopiumbysandrarives created my national costume 🤠 . @worldwideaustralia printed all my campaign material 📚 . @faconceptstore sourced all of my clothing 👑 . Possible because of @mrgayprideaus and @yourgaynation 🙌🏽 . #MGW2018 @mgworg
A post shared by JORDAN BRUNO 👨🏽‍🍳 (@jordanbruno.mkr) on May 27, 2018 at 4:26am PDT

Some succeed because they are destined to but most succeed because they are determined 👏🏽 . I will never stop fighting for LGBTI rights, hustling for my own cooking show and practising self love daily 🏳️‍🌈👨🏽‍🍳📚 . Watch. This. Bitch. WERK. . Photo by the talented @derec_ethan 📸 Clothing from @teamm8 👙 . #MGW2018 #TheGayChef @mgworg
A post shared by JORDAN BRUNO 👨🏽‍🍳 (@jordanbruno.mkr) on May 15, 2018 at 3:02am PDT

When will the world learn that it feels good to love everyone equally. 🏳️‍🌈❤️🌏 Photo by the incredibly talented @skinnyguywithacamera and hair by my gay ski week dancing partner @fredlemarche ❤️ #loveislove🌈
A post shared by JORDAN BRUNO 👨🏽‍🍳 (@jordanbruno.mkr) on Jul 27, 2017 at 3:27am PDT

I have fallen in love with the area of Franschhoek in South Africa! The wine is incredible, the people are the sweetest, the views are breathtaking and the food is utterly unbelievable! ❤️🙌🏽 . Thank you @lermitage_ for putting me up, showing me around, spoiling me and even giving me the honeymoon sweet (it’s probably the only time I’ll ever get to be in one) 😂🤷🏽‍♂️ . I can’t recommend your gorgeous villas and chateaus enough!!! ⭐️🌟⭐️🌟⭐️ . Swipe across for photos and check out my story for a tour 📸 . #ThisIsSouthAfrica #SouthAfrica #VisitSouthAfrica #Lermitage #Franschhoek
A post shared by JORDAN BRUNO 👨🏽‍🍳 (@jordanbruno.mkr) on May 29, 2018 at 2:22am PDT