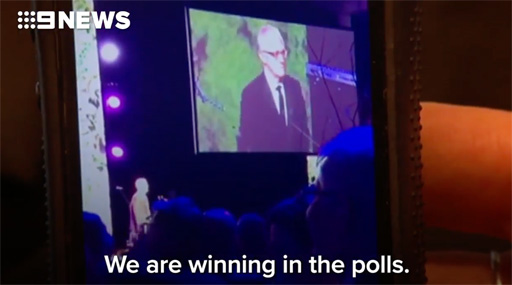 This probably won’t do much to warm up the chilly relationship between President Trump and Australia’s Prime Minister, Malcolm Turnbull.

At a recent event down under, Turnbull’s off the record speech to journalists included mimicking Trump’s attacks on fake news, “winning,” and ties to Russia all done in the Donald’s now famous hyperbole.

“We’re winning in the real polls.

Speeches at the press gallery Midwinter Ball are intended to be light-hearted. For a decade, the speeches made at the dinner have been widely regarded as being off-the-record. However, the most senior press gallery journalist, Channel Nine’s Laurie Oakes, routinely refuses to attend the ball and has consistently said he is not bound by the off-the-record convention.

I do think that if the annual ball’s antics are agreed to be “off-the-record,” then Oakes is something of a dick to publish even if he didn’t attend.

Listen to Turnbull’s comments below.