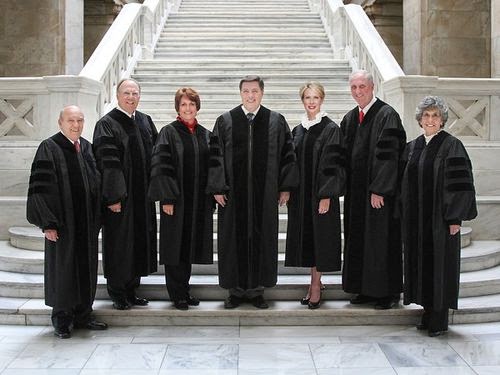 The Arkansas Supreme Court dismissed the state’s appeal of the pending case over the state’s same-sex marriage ban and denied a request for a stay of the trial court order.

The high court on Wednesday turned down the request from Attorney General Dustin McDaniel that would have halted the issuance of same-sex marriage licenses.

Pulaski County Circuit Judge Chris Piazza had ruled last week that a voter-approved gay marriage ban was unconstitutional, but didn’t issue a stay. A few counties began issuing marriage licenses, and by midweek about 450 couples had gotten them.

The vast majority of the state’s counties refused to grant licenses, saying the Supreme Court needed to weigh in. McDaniel said a stay was necessary because clerks did not know whether they were obligated to issue licenses.

There is a technical detail that Judge Piazza’s ruling missed that the plaintiffs plan on addressing.

From the Arkansas Times.

Marriage equality remains the law of the land in Arkansas, but the court injected a wrinkle that will give counties cover to continue to refuse marriage licenses to same-sex couples. The court noted that Piazza’s ruling didn’t mention a statute that prohibits clerks from issuing marriage licenses to same sex couples. Action will now shift to Piazza’s court to pursue final orders, injunctive relief and a cleanup on the omitted statute.