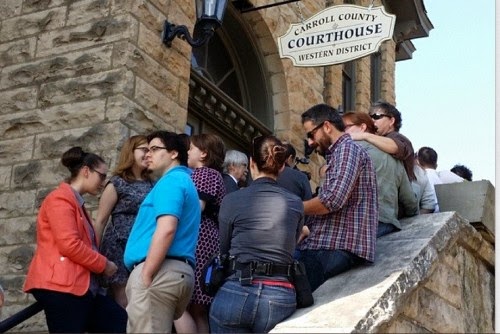 The Carroll County Clerk is refusing to issue marriage licenses this morning to same-sex couples, even though Circuit Court Judge Chris Piazza ruled yesterday that Arkansas’ ban violated both the U.S. and Arkansas Constitutions.

The clerk has told the crowd that she “has not been given permission” to issue the licenses.

The Carroll County Clerk’s office in Eureka Springs, Arkansas, which The Advocate has called the “Gayest small town in America” has regular Saturday hours, and in the wake of the judge’s order, which has not yet been stayed, same-sex couples have lined up expecting to be issued marriage licenses. Clergy have gathered in an adjacent park ready to marry couples on the spot.

Lawyers are now in conference with the clerk, and the crowds have not disbursed.

Apparently, lawyers are now speaking with the clerk as the crowd waits.

(from The New Civil Rights Movement)