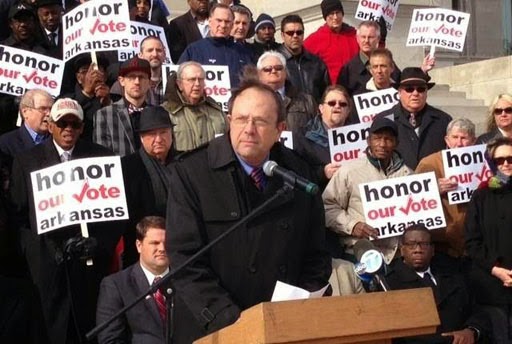 The head of the anti-gay Arkansas Family Council, Jerry Cox, is super-mad about yesterday’s ruling by a federal judge which struck down the state’s ban on same-sex marriage.

“This is another example of judicial tyranny.

“Arkansans voted overwhelmingly to define marriage as the union of one man and one woman. Their elected officials voted for that definition when they passed Arkansas’ Defense of Marriage Act.

“By issuing this ruling, one federal judge is saying seventy-five percent of Arkansas voters and lawmakers do not matter. If that isn’t tyranny, I don’t know what is.

“What Judge Baker effectively did was erase Arkansas’ definition of marriage. It opens the door for marriage to become anything. We have already seen polygamists in Utah and elsewhere try to ride the coat tails of same-sex marriage activists in court. Rulings like this one only fuel those efforts.

Seriously? Letting people who love each other marry is YOUR definition of “tyranny?”

Pal, you need to get out in the world more. There’s lots worse than equal rights for everyone.