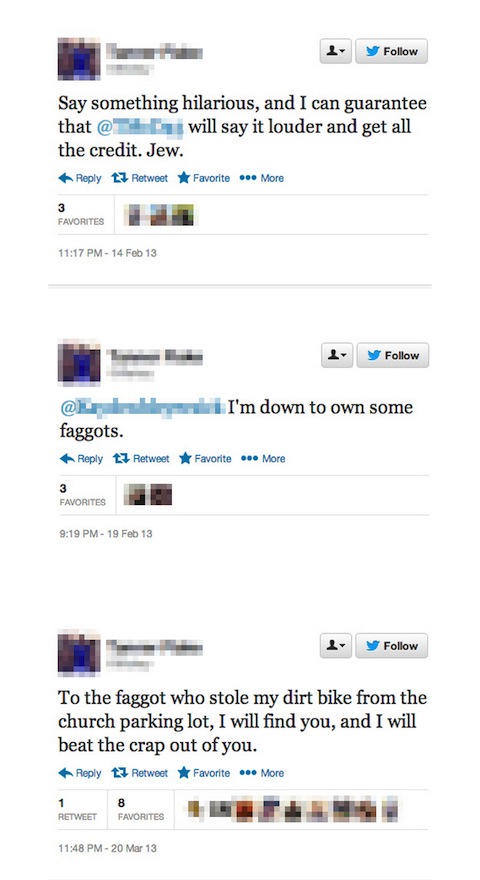 Sen. Jeff Flake’s high school-aged son Tanner used twitter to threaten the “faggot” who stole his bike that he “will find you, and … will beat the crap out of you,” joked about an acquaintance stealing one-liners because he’s Jewish, and went by the name “n1ggerkiller” in an online game.

Another message said “I’m down to own some faggots.”

“I’m very disappointed in my teenage son’s words, and I sincerely apologize for the insensitivity. This language is unacceptable, anywhere. Needless to say, I’ve already spoken with him about this, he has apologized, and I apologize as well.”

Flake’s son’s YouTube comments contain the same slurs, and also “called Mexicans the ‘scum of the Earth’ and on several occasions bragged that his father is a member of Congress. Here are a few more samples of Tanner Flakes YouTube comments:

“you faggot retard pussy piece of crap i hope you die in a hole slowly and painfully”
“you gay fag ni**er go shoot yourself because no body likes you”
“Mexicans are the scum of the earth.”
“Then some ni**er started rapping and I looked at her album art and saw that it was Flo Rida.”
“IT’S THE NI**ER FAMILY!!!!”
“Stupid little ni**er”
“go die in a hole you stupid ni**er”
“The black guy always fails first…”
“Yes, because one white dude goes nuts. No. Black people do crap like this all of the time.”
“When he called himself a cheap jew i loled hard”

Find more examples over on Buzzfeed.