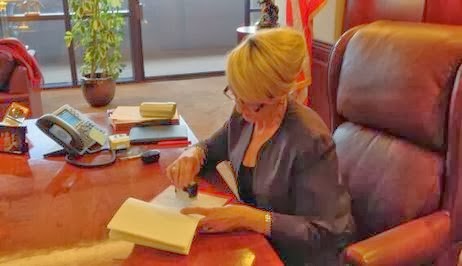 After days of speculation, and a very public backlash to the legislation, Governor Jan Brewer vetoed Arizona’s SB-1062 bill dubbed the “License to Discriminate.”

In the past week, almost 100 corporations that do business in Arizona had publicly urged the governor to kill the legislation. In addition, both US Senators from the Grand Canyon state was well as GOP state Senators who had originally voted FOR the bill came out publicly against it.

Sports Illustrated reported earlier today that in light of no decision from the governor, the NFL was looking into options to move the Super Bowl out of Arizona and possibly to runner-up city Tampa Bay.

In a short public statement, Gov. Brewer said that the measure was “broadly worded and could result in unintended and negative consequences.” Which was true, but probably more “unintended” in terms of the fact that the bill showed it’s supporters to be the bigots they are.

What was missing from the governor’s statement was saying she was vetoing the bill because it’s basically immoral and discriminatory.

With today’s veto, Governor Brewer spared her state from institutional discrimination and economic catastrophe. Make no mistake, there is no better way to doom jobs in a state than by signing license-to-discriminate bills,” said Human Rights Campaign (HRC) President Chad Griffin. “The bipartisan outpouring of opposition to this bill is all the proof you need that this country isn’t turning backwards. Governor Brewer did the right thing in stopping this assault on businesses and the LGBT community and we call on her and the legislature–and governors and legislators in other states–to resist any attempt to give license to discrimination.”

“Discrimination has no place
in Arizona, or anywhere else,” said Alessandra Soler, executive director
of the ACLU of Arizona. “We’re grateful that the governor has stopped
this disgraceful law from taking effect, and that Arizona will remain
open for business to everyone.”

“We thank Governor Brewer for her decision to veto this outrageous measure — a law that if enacted would be bad for Arizona people and the Arizona economy. In doing so, she has stopped a bill that both cynically uses religion as a smokescreen to justify discrimination and insults people of faith who feel that discrimination is morally wrong. This decision sends a clear message that extremism is totally unacceptable to people of all political persuasions.”

“Governor Jan Brewer stood on the right of history today by vetoing SB 1062. It is clear that this bill would have hurt business, caused unnecessary controversy, and — most importantly — increased the suffering of LGBTQ people in Arizona. We are relieved that she has shown leadership and vetoed a bill that is bad for business and bad for the people of Arizona”

“Gov. Jan Brewer avoided going down in history as ‘Jan Crow’ by wisely vetoing this wolf in sheep’s clothing,” said Truth Wins Out’s Executive Director Wayne Besen. “If this bill had become law, it would have been a disaster for Arizona’s reputation and severely tarnished the governor’s legacy”

“Arizona’s recent history has taught corporate and civic leaders that discrimination is terrible for business. This religion bill would have reversed the state’s hard-won economic progress by declaring “open season” on LGBT people. Everyone in Arizona deserves respect and inclusion, including same-sex couples and their families, and people of all faiths and backgrounds. Governor Brewer did the right thing with today’s veto.”