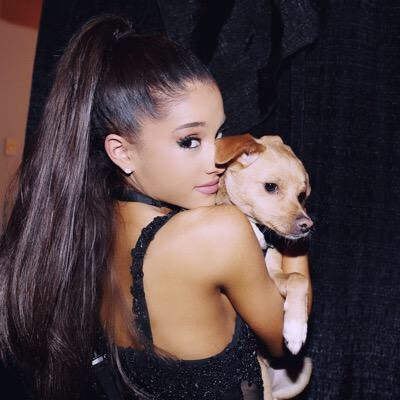 As part of Billboard Magazine’s 30 Days of Pride celebration this June, the magazine asked numerous pop culture luminaries to write ‘love letters’ to their LGBTQ fans.

Today, Billboard kicks off the month with a note of encouragement and acceptance from pop superstar, Ariana Grande.

There is nothing more infectious than the joy and love that the LGBTQ community exudes.

I grew up with a gay brother whose every move I would emulate. I idolized him. Everything Frankie did, I would do. I can’t remember a difference between Frankie before he came out and Frankie after he came out. He’s always just been Frankie.

Sexuality and gender were never topics my family and I were afraid to discuss. When Frankie came out my surprisingly unfazed (for his age) grandfather said “Congrats! Can we go to dinner now? I’m fuckin’ hungry.”

I was taught to do my makeup by queens in gay bars in New York City. I made my Broadway debut at 14 years old and did 8 shows a week but there was never a night I was too tired to run to a gay bar and do a quick Whitney cover before bed.

My music being embraced and celebrated by the LGBTQ community is all I ever truly cared about when I thought about my career goals early on. There’s no award I could win or accolade I could receive that would fulfill me more than seeing a 6-foot queen with a 4-foot ponytail walk into my meet n greet and say “hey girl” or meeting a young queer person at Starbucks and them letting me know that my music has helped them become who they are. Literally nothing.

Love is like music. It knows no boundaries and isn’t exclusive to any one gender, sexuality, race, religion, age or creed. It’s a freedom and a delicious luxury that all people should be able to sink into and enjoy every moment of.

I am eternally indebted to and inspired by the LGBTQ community. I hope to create anthems for you that wrap you up with comfort and make you get your best life for as long as I live. Thank you for celebrating me the way I celebrate you.

I love you forever.

In 2017, the recently-launched ‘Billboard Pride’ debuted the LGBTQ Love Letters Project which featured queer artists and allies sharing their love and support for the community. With letters from everyone from Barbra Streisand to Selena Gomez to Britney Spears (who wrote hers by hand) to RuPaul to Adam Lambert, the love letters fostered solidarity and acceptance in a year where it was sorely needed.

See my previous post about Donald Trump’s lack of support during Pride Month.

Under Pride Editor Patrick Crowley, Billboard continues to expand its coverage of LGBTQ artists and culture, from partnering with GLAAD to create a video of musicians speaking out against the military trans ban to shining a spotlight on rising queer talents who are often overlooked in the mainstream.

As an additional testement to Billboard’s devotion to their LGBTQ readers – GLAAD recently honored Billboard with an award for Outstanding Magazine Overall Coverage at the 2018 GLAAD Media Awards in May.

Visit Billboard Pride for more coverage throughout the month.