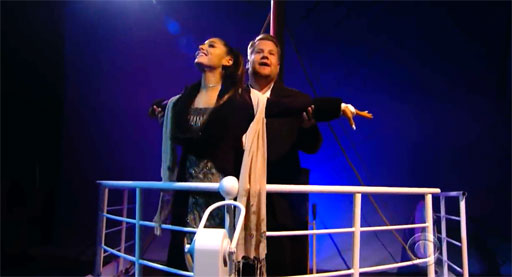 But the highlight of the appearance was Grande and Corden bringing the story of Titanic to life in a short mini-musical utilizing 13 songs and 9 different sets in one non-stop take.

And, of course, the only way to close out the mega-mix was for Grande to deliver a soaring Celine Dion tribute with “My Heart Will Go On.”

The LGBTQ ally also made an appearance on Corden’s Carpool Karaoke on Wednesday where she sang some of her hits, shared that the theme of her second birthday party was the movie Jaws, gave Corden some coaching on riffing, and pulled out some of her fantastic Celine Dion impersonation with a bit of “All Coming Back To Me Now.”

Dang, this girl is fierce. Watch the fun below and check out her new album here on iTunes.