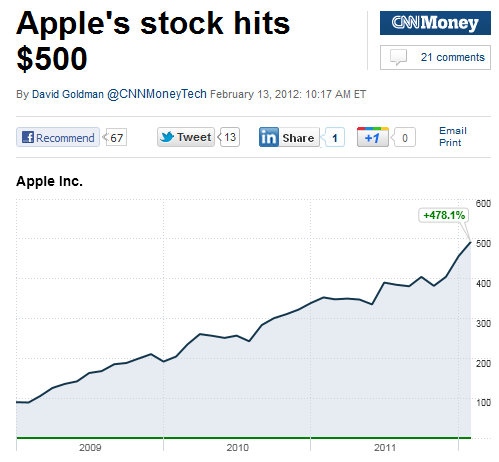 Apple’s stock topped $500 for the first time on Wall Street even as a probe started looking into work conditions at a Chinese factory that cranks out the California company’s coveted gadgets.

Apple shares gained 1.86 percent during the day, powered by reports a new iPad may be unveiled next month, to close at $502.60 and then inched up more in after-hours trading.

Despite the investigation into labor practices, Apple also continued to show its strength with consumers, dethroning Google in the annual Harris Poll RQ study as the company with the most respected image in the eyes of consumers.

The maker of iPhones, iPads, iPods and Macintosh computers got the highest score ever seen in the survey, which asks people to rate the reputations of 60 of the most well-known US companies.