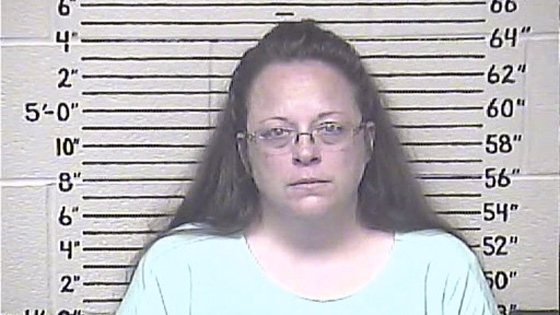 An appeals court has ruled that Davis can be sued as an individual for refusing to issue marriage licenses to two same-sex couples after the historic U.S. Supreme Court Obergefell ruling in 2015.

The Kentucky county clerk who in 2015 gained widespread attention for refusing to issue marriage licenses to same-sex couples may be sued for damages by two of those couples, a federal appeals court ruled late on Friday.

In a 3-0 decision, the 6th U.S. Circuit Court of Appeals in Cincinnati said Kim Davis can be sued in her individual capacity, though sovereign immunity shielded her from being sued in her former role as Rowan County Clerk.

Davis claimed that Obergefell v Hodges, the 2015 U.S. Supreme Court decision recognizing a constitutional right to same-sex marriage, did not apply to her because she stopped issuing licenses to everyone regardless of sexual orientation, and the plaintiffs could have obtained licenses elsewhere.

She was represented by the virulently anti-LGBTQ Liberty Counsel law firm. Mat Staver, the organization’s founder told the press, “She had no hostility to anyone, given that she stopped issuing all marriage licenses.”

In related news, the 6th Circuit Court also ruled that the state of Kentucky is on the hook for $224,000 in legal fees incurred by the couples who sued Davis when she refused to issue same-sex marriage licenses.

According to the Lexington Courier-Journal, Gov. Matt Bevin fought the judgment saying Davis should be responsible for the fees, not the state of Kentucky. He lost.