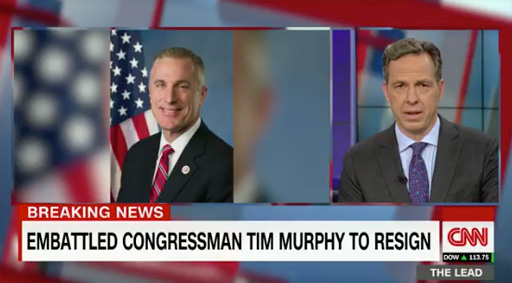 Virulently anti-abortion, anti-LGBT and hypocritical pro-family values Congressman Tim Murphy of Pennsylvania has resigned after text messages revealed he had an extramarital affair.

Further, when his mistress believed she was pregnant with his child, he apparently urged her to seek an abortion.

Text messages revealed earlier this week showed the woman with whom Murphy is having an extra-marital affair told Murphy, “you have zero issue posting your pro-life stance all over the place when you had no issue asking me to abort our unborn child just last week when we thought that was one of the options,” according to the Pittsburgh Post-Gazette.

Responding to the message, Rep. Murphy said: “I get what you say about my March for life messages. I’ve never written them. Staff does them. I read them and winced. I told staff don’t write any more. I will.”

Speaker of the House Paul Ryan issued a statement today which read, in part, “This afternoon I received a letter of resignation from Congressman Tim Murphy, effective October 21. It was Dr. Murphy’s decision to move on to the next chapter of his life, and I support it.”

Murphy will leave office on October 21.

The governor of Pennsylvania cannot appoint a replacement, and so a special election will have to be called.

While possible, it’s highly unlikely a Democrat would win the seat since the district is considered solidly red.

Tim Murphy = a pro-life icon Rep who bullied his mistress into an abortion bc an out-of-wedlock child can harm a pro-life icon rep.— John Fugelsang (@JohnFugelsang) October 5, 2017