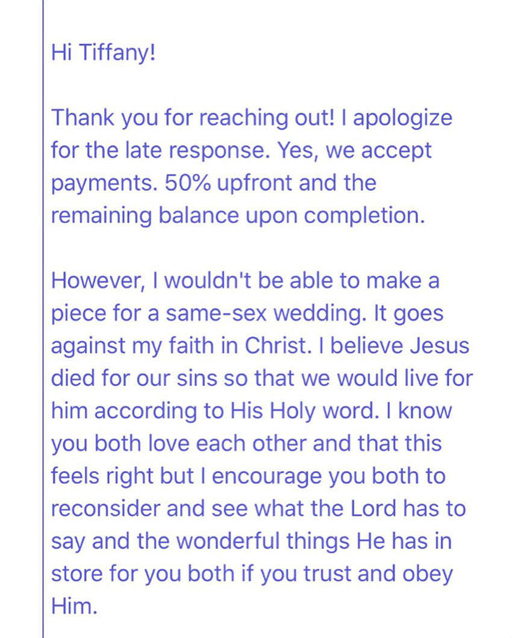 Another wedding vendor has denied services to a same-sex couple for their upcoming nuptials.

Angel Lane and her fiancée Tiffany Allen have plans to get married this October in Las Vegas.

In making plans for what to wear for the big occasion, they reached out to fashion brand D. Auxilly in New York City, specifically regarding a $1,500 jumpsuit.

The couple reached out to designer Dominique K. Galbraith about ordering the clothing.

But Galbraith refused to take the order after hearing the couple were lesbians. She said whipping up a wedding outfit for a same-sex wedding violated her Christian faith.

In an email, Galbraith wrote:

“I wouldn’t be able to make a piece for a same-sex wedding. It goes against my faith in Christ. I believe Jesus died for our sins so that we would live for him according to His Holy Word. I know you both love each other and that this feels right but I encourage you both to reconsider and see what the Lord has to say and the wonderful things He has in store for you both if you trust and obey Him.”

She added that she would “be available to talk and share more about Jesus if you’d like. Feel free to call me.”

Speaking to Metro, Allen said, “I hurt because I didn’t feel good enough.”

“A person who truly has that heart will tell you that God doesn’t make any mistakes,” she added. “I’m not a mistake. My fiancée is not a mistake.”

Since sharing their story on social media, the couple say many designers have reached out with offers to provide for their wedding ceremony.

It’s important to note that Lane and Allen live in Missouri where there are no public accommodation laws to protect people from discrimination based on sexual orientation.

However, Galbraith’s business is located in New York state which most certainly does prohibit turning away business due to anti-LGBTQ bias.

Metro reports Tiffany and Angel are filing now filing a formal complaint against D Auxilly, and are also considering taking a lawsuit against the company.

Galbraith reportedly hung up the phone without comment when contacted by Metro.