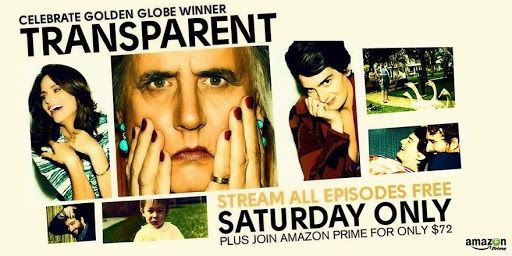 If you haven’t yet seen Amazon’s highly acclaimed series Transparent, now you can – and for FREE!

Transparent is putting Amazon on the map for original programming in a bigger way than any of the company’s other shows have. And there are awards to prove it.

Jill Solloway’s series earned two Golden Globes earlier this month. One was for best television comedy or musical; Amazon knocked off Netflix’s Orange is the New Black to win that one. The other went to series lead Jeffrey Tambor, who has received universal praise for his performance in the show’s first season.

And on Saturday, Amazon will use all of that buzz to sell a whole ton of new Prime subscriptions. The company will make Transparent‘s entire first season free to stream for all customers, not just those paying yearly for Prime.

I’ve had an Amazon Prime membership for years – well worth the price. Not only do you get access to tons of movies and TV series to stream anytime you like, you get free two-day shipping on most items you order from the online mega-store. HIGHLY recommended. Click here to get the details.