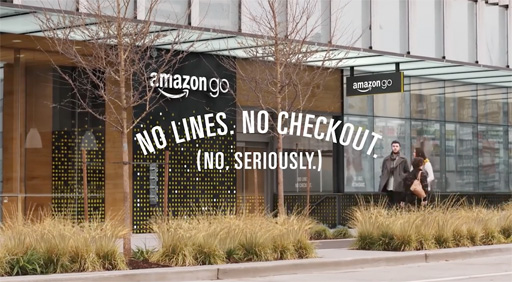 This sounds fab! I would so shop here.

Taking grab-and-go to the next level. Amazon just opened a state-of-the art grocery store called Amazon Go in downtown Seattle that lets customers shop without ever waiting in line or going through a checkout process. In a video introducing the concept Monday, December 5, the e-commerce company refers to it as “just-walk-out technology” and shows a man walking in, picking up a sandwich and immediately leaving.

This is how it works: When customers enter the store, they pull up the Amazon Go app and tap their cellphones on a turnstile. When customers pick up items from the shelf, the items are automatically added to their virtual shopping cart in the app. It works for indecisive shoppers, too. If customers change their mind about an item, they can just put it back on the shelf. The charge will be deducted from their cart.

Once patrons have everything they need, they simply exit the store. When they leave, Amazon’s technology adds up their purchases and charges it to their Amazon account. A receipt is instantly sent via the app. A source tells The Wall Street Journal that Amazon will soon open two more Seattle-area grocery stores in the next few weeks, but these locations will be drive-thru only. According to the source, the retail giant is hoping to open more than 2,000 grocery stores across the country depending on the success of the test locations.