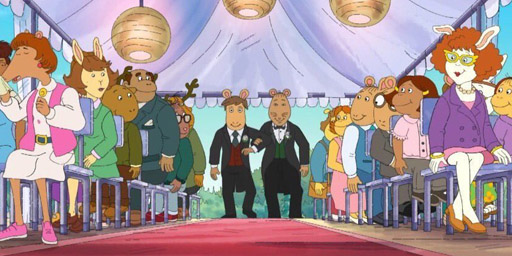 The long-running PBS children’s show, Arthur, opened its 22nd season last week with an episode featuring one of the animated characters marrying to his male partner.

In an episode titled “Mr. Ratburn and the Special Someone,” it turns out that Arthur’s stern yet forgiving 3rd grade teacher is gay, and marries his boyfriend, Patrick.

The storyline was celebrated by LGBTQ advocacy groups like GLAAD:

While the episode doesn’t mention the word “gay” or “homosexual,” I did wonder if some folks might be offended or raise their homophobic voices in opposition to two animated characters finding happiness together.

Yep. And some of those folks are in Alabama.

Alabama Public Television (APT) decided the same-sex wedding was too much for its intended audience to handle, and refused to air the episode. Instead, APT chose to air a re-run.

Yes, this is the same Alabama where public lawmakers just passed a law which will require a 13-year-old rape victim to carry a possible child to term.

Perhaps if Mr. Ratburn HAD married his sister, Alabama community standards would have been fine with the show? https://t.co/jeKuQjo26j

Mike McKenzie, the director of programming at APT, confirmed to NBC News that upon receiving an alert from PBS in mid-April about “possible concerns about the content of the program,” APT felt it was best to omit the episode from their schedule.

“Parents have trusted Alabama Public Television for more than 50 years to provide children’s programs that entertain, educate, and inspire,” Mike McKenzie, director of programming at APT, said in a statement.

“More importantly—although we strongly encourage parents to watch television with their children and talk about what they have learned afterwards—parents trust that their children can watch APT without their supervision,” continued McKenzie. “We also know that children who are younger than the ‘target’ audience for Arthur also watch the program.”

“The vast majority of parents will not have heard about the content, whether they agree with it or not,” added McKenzie. “Because of this, we felt it would be a violation of trust to broadcast the episode.”

Interestingly, one parent heard about the LGBTQ-inclusive episode and recorded the show with plans to watch with her 9-year-old daughter. But Misty Souder told AL.com that she was disappointed to only find a re-run on her DVR.

Souder says she contacted APT about the censorship, and used the experience as a teaching moment for her daughter about the importance of standing up for others.

“I just want her to be aware,” Souder explained to AL.com. “There’s too much going on not to stand up for stuff, even if it’s Arthur. I never thought I’d be going to battle for a gay rat wedding, but here we are.”

In a 2005 episode, a bunny character named Buster visited a girl who was revealed to have two mothers.

Yep – APT pulled that installment, too.

According to AL.com, then-executive director of APT Allan Pizzato explained, “Our feeling is that we basically have a trust with parents about our programming.”

“This program doesn’t fit into that,” he added.