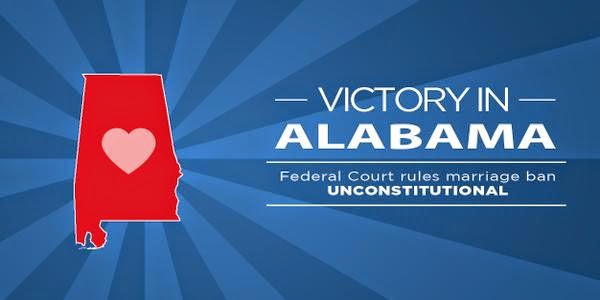 A federal trial court judge in Alabama ruled today that the state’s ban on same-sex marriage is unconstitutional.

Such a law “humiliates [ ] thousands of children now being raised by same-sex couples. The law in question makes it even more difficult for the children to understand the integrity and closeness of their own family and its concord with other families in their community and in their daily lives.” Windsor, 133 S.Ct. at 2694. Alabama’s prohibition and non-recognition of same-sex marriage “also brings financial harm to children of same-sex couples.” id. at 2695, because it denies the families of these children a panoply of benefits that the State and the federal government offer to families who are legally wed.

Additionally, these laws further injures those children of all couples who are themselves gay or lesbian, and who will grow up knowing that Alabama does not believe they are as capable of creating a family as their heterosexual friends. For all of these reasons, the court finds that Alabama’s marriage laws violate the Due Process Clause and Equal Protection Clause of the Fourteenth Amendment to the United States Constitution.

The ruling seems to have declared the state amendment and statutes involved to be unconstitutional in regard to recognition of out-of-state marriages and marriages that are performed in Alabama.

In the judgment enforcing the court’s decision, Granade wrote,

“ALA. CONST. ART. I, § 36.03 (2006) and ALA. CODE 1975 § 30-1-19 are hereby DECLARED to be unconstitutional because they violate they Due Process Clause and the Equal Protection Clause of the Fourteenth Amendment. The defendant Luther Strange, in his capacity as Attorney General for the State of Alabama, is hereby ENJOINED from enforcing those laws.”

Judge Granade did NOT include a stay in her ruling. This means the ruling is effective immediately. And there is no waiting period in Alabama.

The Alabama Attorney General’s Office indicated it would continue to fight the case.

“We are disappointed and are reviewing the Federal District Court’s decision,” spokesman Mike Lewis said via email. “We expect to ask for a stay of the court’s judgment pending the outcome of the U.S. Supreme Court’s ruling which will ultimately decide this case.”