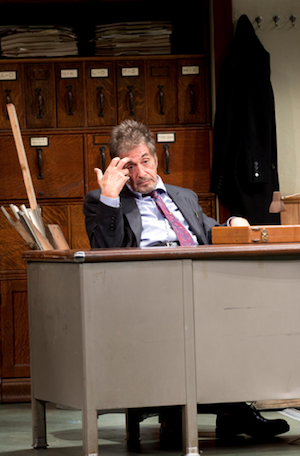 “Despite mixed reviews for his performance, Pacino has also been the major draw in a production that has frequently grossed more than $1 million a week since opening on Dec. 8. Its cumulative box office is currently at $9.2 million. Those figures have been pumped significantly by premium seats selling for as much as $350 apiece.

“The negligible impact of reviews on the production can be seen in its grosses for the week ending Dec. 16, its first since the official opening. That tally of more than $1.2 million was the highest since the play began previews on Oct. 19.”

Some folks in the industry felt the current revival pales in comparison to the very strong 2005 production that starred Liev Schreiber and Alan Alda.

However, clearly it’s a good thing to have Al Pacino as your salesman.

The show continues on Broadway at the Gerald Schoenfeld Theater.