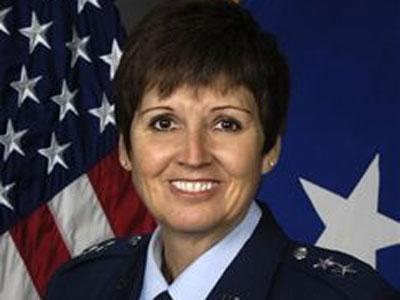 Air Force Major General Patricia Rose is now the highest ranking openly gay officer in the military after she was promoted May 31.

Rose’s promotion ceremony was held on May 31, led by her direct supervisor, General Janet Wolfenbarger, the first female four-star general in the United States Air Force. With a small crowd in attendance, Rose’s wife pinned her second star.

Rose is the Mobilization Assistant to the Commander, Air Force Materiel Command, Wright-Patterson Air Force Base, Ohio. A logistician, she’s served assignments in both aircraft maintenance and transportation in seven different commands. Her reserve assignments include command of the 36th Aerial Port Squadron at McChord AFB, Washington, where her squadron won the dual distinction of being selected for an Air Force Outstanding Unit Award and Air Mobility Command’s Total Force Air Reserve Component Aerial Port Unit of the Year.

Rose and Roth were legally married in their home state of Washington after marriage equality became legal in the state last year. When Rose earned her first star, she asked her friend and neighbor, Colonel Grethe Cammermeyer, to pin it in a private promotion ceremony. Cammermeyer, a fellow Washingtonian, was ejected from the Washington National Guard for admitting she was gay and became a prominent advocate for the repeal of “Don’t Ask, Don’t Tell.” Her story was told in the film “Serving in Silence.”

In her civilian capacity, Rose is the public relations and marketing director for a local hospital.