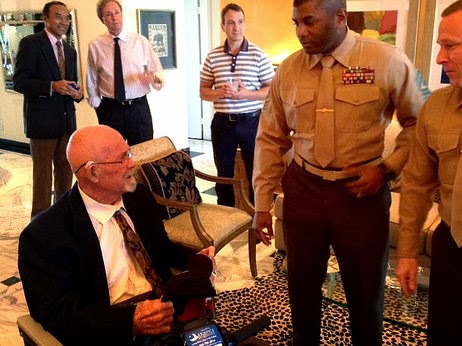 Having entered the US Marines in 1953, he was given a dishonorable discharge in 1956.  The discharge papers read “homosexual.”  He avoided sharing that unearned shame with most for decades.

Although Faulkner had only come out to his family in 2005, with the repeal of Don’t Ask, Don’t Tell, Faulkner asked his family for help with one last wish as his health waned.

He wanted his military record upgraded to clear his name. Time, however, was growing short. A correction of military records usually takes at least six months, as well as a lawyer.

When lawyer Anne Brooksher-Yen saw the case and the time frame, she was worried, even when the military agreed to expedite the case.

“I didn’t know whether expedited was going to mean six weeks or six months,” Anne Brooksher-Yen says. “So I did have a conversation with him that we might not be able to get this done before he died.”

The Marines acted on his dying request in just two weeks. Last Friday in Florida, a small group presented Faulkner with his honorable discharge.

For Faulkner, it was never about the benefits, says his lawyer Anne Brooksher-Yen.

“It was really overwhelming seeing Hal finally have this wrong righted,” she says. “He is such a wonderful loving man, and he served with honor in the military and it was so important to him.”

“I don’t have much longer to live,” Faulkner said, “I will always be a Marine. Thank you. Semper fi.”

The young marines answered him back with the Marines battle cry: “Oorah.”

Fred Sainz of the HRC says many discharged as gay don’t know they could file for possible “honorable discharge” status. Such a change in paper work could lead to many well-deserved benefits like access to VA loans and health care.

Listen to the story from NPR: