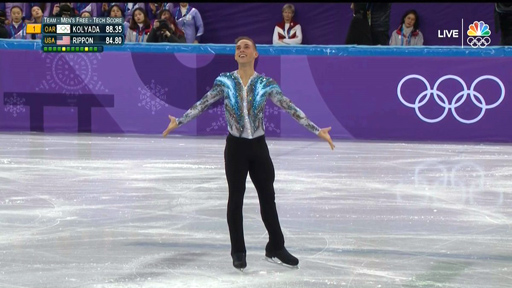 Out U.S. figure skater Adam Rippon may have finished tenth in the men’s Olympic figure skating event in PyeongChang, but there’s no question he is a star at the 2018 Winter Olympics.

After a perfect short program landed Rippon in 7th place, Rippon took to the ice last night for his final Olympic skate.

Watching the scoring, viewers could see the triple axels Rippon landed over and over only garnered about 9-10 technical points while the quad jumps were getting 15-18 points each. Multiply that by 5-6 jumps per skate and you see the math was not in Rippon’s favor.

But Rippon gave Olympic fans all that he had. And more.

He skated his long program exactly as he planned landing seven triple jumps, completing every spin and along the way reminded folks that artistry counts.

Additionally, Rippon was authentically “Adam” every step of the way. His charisma and charm captured the hearts of viewers around the world.

As an LGBTQ journalist and advocate, my heart grew three sizes larger as I celebrated Adam’s amazing achievement.

“The Olympics are about a whole lot more than just medals,” said NBC commentator Johnny Weir, “and Adam Rippon just proved that.”

Moments after his final Olympic skate, he spoke with passion and clarity about his Olympic experience.

“I have gotten a lot of attention just for being myself,” he said. “A lot of people when they come to a competition are afraid to be themselves, no matter who they are. One thing I want to come with from this competition — I am not a gay icon or America’s gay sweetheart. I am just America’s sweetheart and just an icon. If you have a personality like mine it’s for everybody.”

Rippon leaves PyeongChang with a bronze medal for his perfect performance in the team figure skating event that cemented Team USA’s medal win.

“He’s the winner of the Olympics.” Adam Rippon stole everyone’s hearts during the Olympics https://t.co/E47mgck1WF

And @Adaripp absolutely kills it AGAIN in his last performance at #PyeongChang2018 ! pic.twitter.com/by2aTKfk5s

Adam Rippon closed out his run in PyeongChang with an emotional performance and Twitter loved it https://t.co/JcJWvUa7Di

About to watch the queen take her crown. @Adaripp pic.twitter.com/n5XgAYASmK

I don’t fully understand figure skating judging so I can’t really speculate on the scoring but @Adaripp‘s performance was truly mesmerizing. You’re #1 in our hearts, Adam! So proud of you and inspired by you.

the feeling of watching the world stand behind and actively root for a queer person on a global level has been overwhelming.

thank you @Adaripp for helping show LGBTQ youth everywhere that a better world where queer people are authentically celebrated is possible. https://t.co/ct8Ycnd7sK

Athleticism, artistry, and a Heart of Gold. @Adaripp, your positivity and your light shine through in all you do. And this is just the beginning. #WinterOlympics

Congratulations to openly gay Adam Rippon (@Adaripp) on an incredible #Olympics. From your unapologetic visibility to your incredible skating, it is clear that you are the #BestOfUS. 🏳️‍🌈⛸✨

Even without gold, Adam Rippon is an Olympic champion #olympics #AdamRippon https://t.co/OATahae3E8 via @outsports