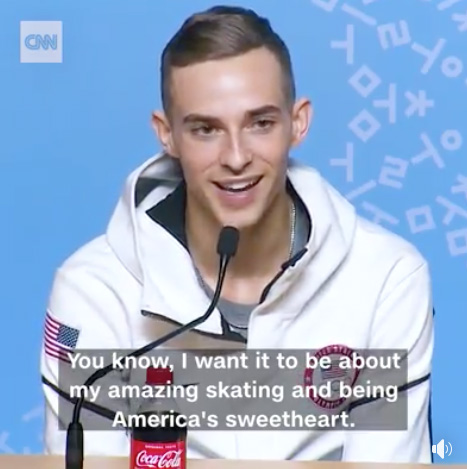 Out US figure skater Adam Rippon, who won a bronze medal for his contribution to the team figure skating event on Sunday, told reporters at a press conference Tuesday that he didn’t want his “Olympic experience to be about Mike Pence.”

“I have no problem talking about what I’ve said because I stand by it, but I think right now the Olympics are about Olympic competition and the athletes involved. I don’t want it to distract from them, and I don’t want my Olympic experience to be about Mike Pence. I want it to be about my amazing skating and being America’s sweetheart.”

You’ll recall the whole Rippon debacle began when Rippon was asked by USA Today about the vice president leading the US delegation for the opening of the Olympics.

Rippon was referencing a 2000 statement on Pence’s congressional campaign website which said, “Resources should be directed toward those institutions which provide assistance to those seeking to change their sexual behavior.”

I’m loving Adam’s clarity about who he is and the ease with which he lives his authentic self.

What a great role model for young people.