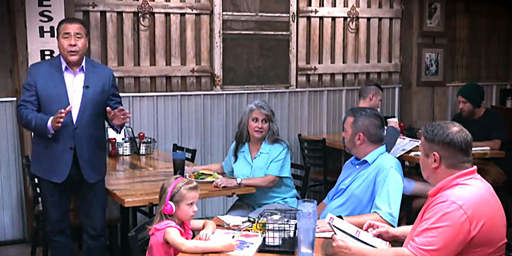 ABC News’ popular What Would You Do? series took a dive into the issue of gay adoption and foster care with a scenario involving a gay couple and their seemingly adopted daughter.

Pointing out that almost 60,000 foster and adopted children across America are being raised by same-sex couples, WWYD notes that the laws regarding same-sex couples adopting vary from state to state.

For instance, in New York state, gay couples are allowed to adopt children no matter their marital status. But in Kentucky, the state requires same-sex couples to be married in order to adopt.

In the experiment, the show set up the same scenario in those two very different states to see if folks’ opinions varied as well.

What would you do if you heard a restaurant patron openly criticize a gay couple for raising a little girl?

First up, in Bardstown, Kentucky, the actress portraying the “intolerant” role calls across the restaurant to compliment the young girl. But when she finds out the couple are two gay dads, things go sour quickly.

“Don’t you think she should have a mother?,” the woman asks loudly. “I don’t think a child should be raised that way,” she adds.

A customer at a table between the couple and the hater quickly shifts her seat so that she blocks the hater’s view.

When the hater addresses the customer, her husband doesn’t hesitate to quickly stand and ask, “Lady, are you nuts or something?”

“You want me to leave?,” the hater asks. “That would be great,” says the gentleman as he sits down to his lunch as the woman exits the restaurant.

In another scene, when the Kentucky hater yells, “That’s an innocent child with two gay men raising her,” another patron calmly explains to the woman, “I’m a teacher. I see it all the time and the children do not have problems.”

Up in Orangetown, New York, the hater is calmly confronted by a diner patron with this epic takedown:

“You need to lighten up lady. You need to back off. Get into the real world. You’ve got two people celebrating and demonstrating love for a child. You’ve got a lot of nerve. It doesn’t matter. Love is love. Would you rather see that child homeless, starving to death? It’s not about your opinion. It’s about the welfare of a child, a human being. The problem in the world is not two men raising a child. The problem in the world is you making comments like that.”

Eventually, the entire restaurant turns on the hater and demands she leave.

Back at the New York diner, a male customer claps back in direct style telling the harasser, “My wife was raised by two women. It’s still love for the child and that’s all that f**king matters. You got a problem with that, f**king leave.”

Watch the scenarios unfold below.