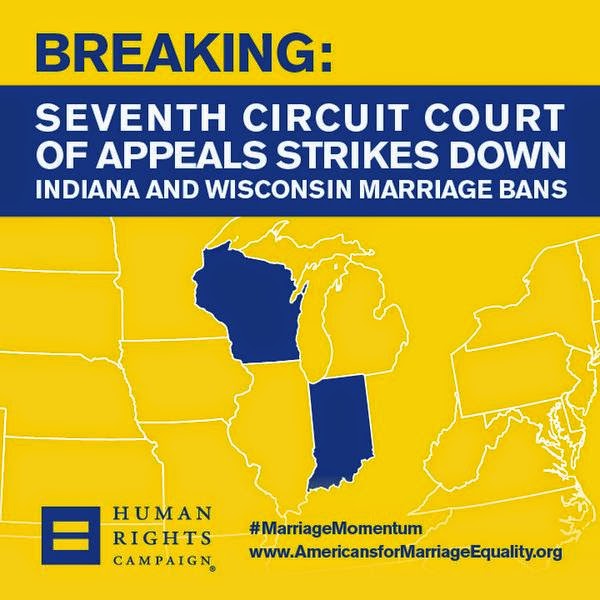 In what is now the fourth appellate ruling in favor of marriage equality, a panel of 3 federal judges for the 7th Circuit Court of Appeals has ruled unanimously that the same-sex marriage bans in Wisconsin and Indiana unconstitutional

According to the 40-page unanimous ruling authored by Judge Richard Posner, who was nominated to the federal bench by President Ronald Reagan, “discrimination against same-sex couples is irrational, and therefore unconstitutional even if the discrimination is not subjected to heightened scrutiny.”

Ruling in two cases, the court found the governments of Indiana and Wisconsin have given no reason to think they have a “reasonable basis” for forbidding same-sex marriage.

“Discrimination by a state or the federal government against a minority, when based on an immutable characteristic of the members of that minority (most familiarly skin color and gender), and occurring against an historical background of discrimination against the persons who have that characteristic, makes the discriminatory law or policy constitutionally suspect,” the ruling states.

Oral arguments were heard before the 7th Circuit Court of Appeals last week in Chicago.

According to Gallup Polls, 55% of Americans support marriage equality. A recent ABC News/Washington Post poll showed 77% of Americans under the age of 30 are in favor of same-sex marriage.

Same-sex couples can legally marry in nineteen states and the District of Columbia.