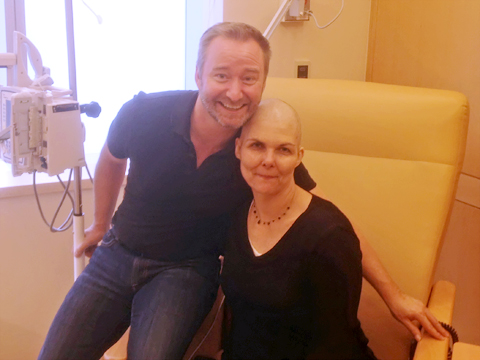 28 years ago today, I graduated from Syracuse University with a BFA in Music Theatre.

I was ready to go out in the world and do… something? Broadway? Something?

My dear friend, Leslie Nipkow, who graduated with me that day has written something of a “love letter to life” for those of us who have never lost the ability to dream. She puts it much better than I ever could.  (She’s a Daytime Emmy Award winning writer, for pete’s sake…)

28 years ago yesterday, I (and many of you) graduated from Syracuse University Visual and Performing Arts. 28 years ago today, I flew into JFK on Peoples Express with nothing but a baby blue hard shell Sears suitcase stuffed with sheet music, leotards and the ubiquitous floral audition dress, and a $1,500 cash award I had won two days earlier for my potential to make a life in the arts.

I stepped out of the Port Authority on to 42d Street (the fantastic way it used to be, and secretly remains, under the shiny happy veneer they’ve slapped on top of it) — the certainty that I would move to New York as soon as possible had pulled me through countless lonely, broken, humiliating, fish-out-of-water moments from my first visit at 11 years old. I was finally here.

I wanted to work for Ellen Stewart at La MaMa. By the end of that day, I was La MaMa’s new box office manager and was living in the theater after the lights came down at night. One foot to the left of my mattress on the floor was the trap through which actors, puppets and other large objects could be lowered to the stage mid-performance. I sat there on my evenings off and watched the shows from above. Full of dreams.

One of the miracles of New York is that I still feel that same electric surge of eagerness when my feet hit the city streets – like anything can happen today. Like I can make it happen, if I am only bold and brave enough. And I am no less full of big dreams today than I was at 21. The trick for me now, after more than a few disappointments, heartbreaks, failures, wrong turns, missed exits, and head-on collisions, is to hang on to that certainty that had me achieve my big dream on my first day in Manhattan – because it’s up to that (still) starry-eyed kid looking to love to make my next big dream(s) a reality.

Leslie’s beautiful spirit is perfectly captured in the above.

What Leslie doesn’t mention (because it wasn’t the message of her piece) is that she writes about her inner “starry-eyed kid” who still loves New York even as she’s kicking the shit out of breast cancer.

While in NYC recently, I got the chance to sit and visit with Leslie. And as life would have it, these two cancer warriors chatted over an “afternoon of chemo.” Ah, life.

As I can attest, Leslie is still the uber-talented, passionate, articulate and bold artist she was 28 years ago. Only more so.

Thanks Leslie for letting me post your essay, and reminding me of that day 28 years ago; how far we’ve come, and how far we still get to go.